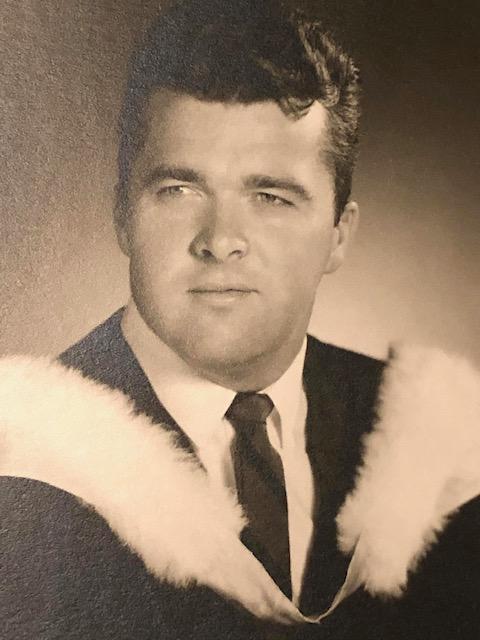 Bill Parker was born in Toronto 1938 to parents Bill and Winnifred Parker and older sister Shirley. He grew up in the Stanley Park area of Toronto with many friends who he has remained friends with to this day.
He attended Niagara Street Public School and Central Technical High School. He helped his Uncle Ben sell newspapers at Queen and Bathurst Streets as a boy for 5 cents a paper and got street smart. While in High School he joined the Toronto Harbour Police for summers and learned about boating law, lifesaving, and life on the water and under it. With instructions in printing, he set off to Banff Springs Hotel to print their menus for a time. Then to the Ontario Provincial Police in Wawa to learn the ways of Law & Order and Northern Ontario life. Another change of direction led back to post-secondary education at McMaster University in Hamilton to become an English teacher with side courses in Phys Ed or History. His first posting was to Grand Valley High School at which time he met Lesley and they were married in 1963. He took another posting at Streetsville High School which precipitated a return to University at U of Toronto to study Law and then Osgoode Hall to study for the Bar. He worked for several years with the Department of Criminal Appeals and Special Prosecutions where he made a great impression on lawyers, judges and criminals, or something like. Discontent again, he went into private practice to help the underdog. He worked for many years as a Barrister and Solicitor, always available to help those with problems. He was well-respected by his peers, the legal community, judges, and clients.
Bill became a dedicated member of the National Club, where his mother worked as a waitress for many years. It was a particularly proud moment for both his mother and himself when Bill became a member. He remained a lifetime member until his death.
Following a catastrophic car accident in 2007, Bill put his mind, focus and efforts toward his rehabilitation and physical healing and was able to walk, work and live an independent life again.
He was always happy spending time with his grandchildren and children, telling stories, giving instruction and support, and always ready to help, comfort and encourage.
Following his father’s death in 1993 Bill took over the responsibility and care of his parents’ Osprey Township rural property. The farm was initially a labour of love for Bill as he balanced a busy career and family life with the care and stewardship of the property. He grew to love the farm, farming community and both the social life of Grey County and the Kinsmen, as well as the quiet solitude of country living.
His diagnosis of terminal cancer in December 2020 was the beginning of a rapid physical decline which was met with Bill’s self-same commitment to living each day to the fullest of his ability. He took the inescapable element of his illness with grace, courage, and strength. He rallied for a portion of the late winter, sharing cherished time and classic stoic outlook with loved ones. The last month was a peaceful winding down of a life well-loved and lived. Lesley and Katherine were tireless and exemplary, experienced caregivers that Bill was grateful for beyond measure. Christopher, Elizabeth and Jesse visited regularly, and grandchildren shared cherished times. His last birthday spent in Prince Edward County was a particular blessing and his last visit to Grey County when all the children surprised Lesley for her 79th Birthday will be seen as a true gift. Bill died peacefully at home in his sleep in the wee hours of Sunday morning.