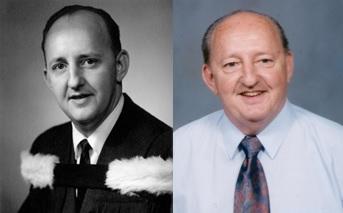 On the evening of February 5, 2021 William Greig died peacefully at his home in Toronto at the age of 89. Bill is lovingly remembered by his sons Michael (Patti), David (Julie), and Martin (Anita); and by his seven grandchildren Michael, Megan, Ian, Mark, Heather, Tara, and Andrew. He was predeceased by his cherished wife June, his sister Lenore, and his baby brother Ralph. He is survived by his sisters Beth and Lily.

Bill was born in New Toronto in 1931, the second child of William and Velma (nee Carefoot), and grew up in numerous communities scattered around southern Ontario. In 1953 he graduated from Teachers’ College in Toronto and began his teaching career at S.S. No. 5, a one-room school house in Vaughan. Two years later Bill was hired by the Toronto School Board to teach at Grace Street Public School where he met June, the love of his life, whom he married in August of 1957.

Three children, full-time teaching, and part-time studies at the University of Toronto made the early years of married life busy ones. He graduated with a BA in 1967. After a brief stint at Annette Street Public School, Bill transferred to Clinton Street Public School in 1969, where he remained until his retirement in 1986.

Bill loved to spend time at his cottage on Harp Lake; he also was an avid stamp collector, enjoyed growing orchids, and was a talented stained-glass craftsman. Bill was a true gentleman who will be best remembered for his dignified, quiet demeanor and dry wit.

The family is grateful for the kindness and caring of the many personal support workers who made it possible for Bill to remain in his beloved home right to the end.