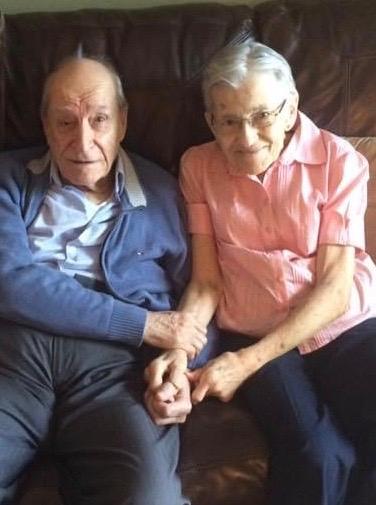 It is with great sadness that the family of Walter Mario Leindekar and Violeta Julieta Leindekar announce their passing May 26, 2020 and May 27, 2020 respectively.

Walter was born June 19, 1927 in Cordona, and Violeta September 11, 1933 in Montevideo, Both in Uruguay. They married May 12, 1951 and lived 69 beautiful years together. He worked many years as a postal worker in Uruguay and later as a building superintendent when they moved their small family to Argentina. They would both continue with this hardworking ethic, after their move to Canada in 1987, with various jobs until their late retirement.

They were simple, caring and very family-oriented people. He was a lovable man with a great sense of humor, always quick to laugh, and eager to tinker with a watch or trinket that he could never quite manage to put back together. She was a wonderful woman who loved to sing and hated to cook, but would do so anyway because her family loved her food. They took their grandchildren camping in the summers, made Tortilla, milanesas and papas fritas especially for you because they were your favorites, and let their great grandchildren call them Welly and Wello because it sounded funny. They were always quick to lend a hand or give a hug, and happy to attend every family gathering. They always showed up, when they were needed and when they were just wanted.

Their resilience in the face of many health issues to this point had been admirable. Violeta having overcome 3 bouts of cancer and battling her fourth, along with congenital heart disease, kidney disease and numerous other ailments through the years. Walter with his battle with bladder cancer and the onset of Alzheimers. Ultimately, their bodies weakened with illness and time, it was the COVID-19 virus that took them not twenty-four hours apart. They left this life as they had lived it, together. In light of their struggles the family asks that donations be made in place of flowers to any of the following organizations,