The portion of Victor Patrick Kelly memorial that you are trying to access requires an extension in order to become active again. Would you like to contribute to the memorial?s extension? 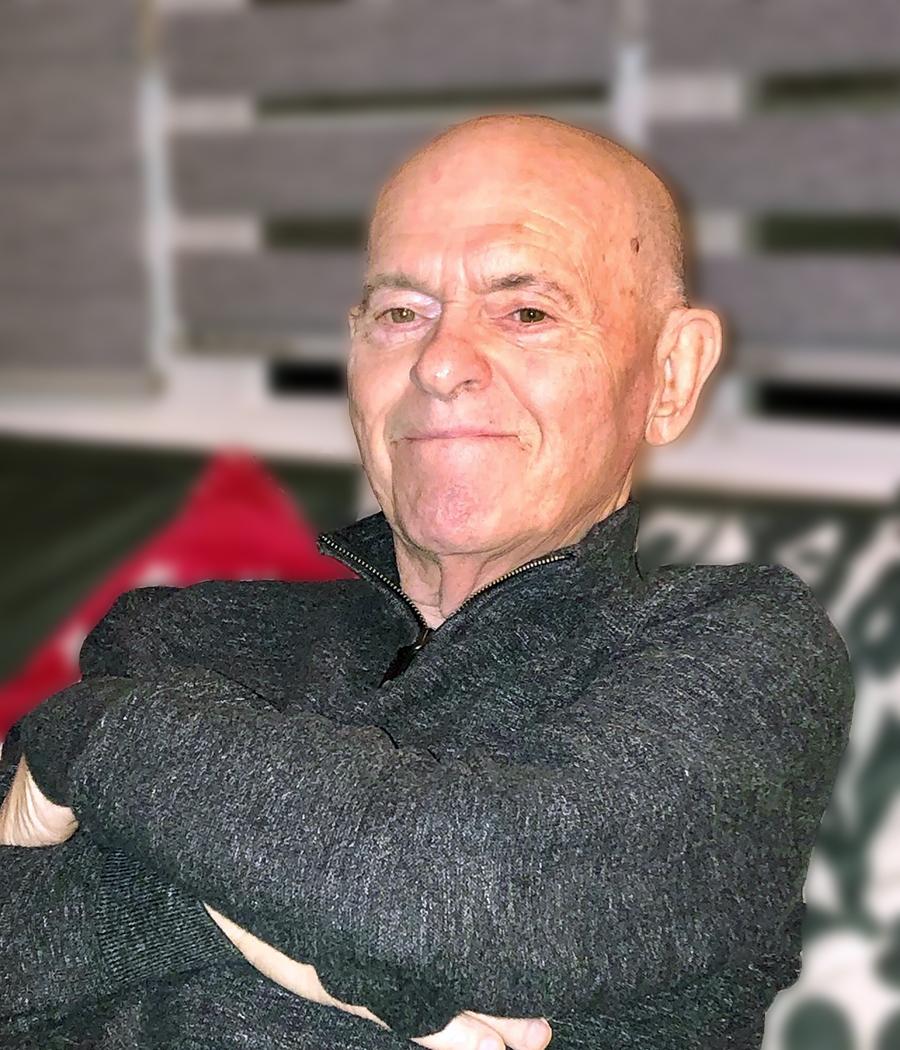 Devoted women's softball coach and honorable retired Captain of the Toronto Fire Department serving the public for 35 years were a few of his greatest achievements.

Our father will be cremated and a Celebration of his Life will be determined and date to be shared at a later time.

If desired, donations may be made to the Cancer Society or the William Osler Health System Foundation c/o Palliative Care Team.

Terry and family,
My deepest condolences on the loss of your father/grandfather. Sending you love and virtual hugs, and hoping that your happiest memories will bring you some comfort at this sad time xo
Love, Judy

The Shaw Family (Friend of the family)

Thinking of you all today. We hope today was filled with amazing memories for you all.

Sorry for your loss, thinking of everyone in your family and wishing we could be there for you more than just in thought. Different times stay strong and safe!
All our love Kevin, Sylvia, Sean, Rachel, Abby and Remy!💐

Terry and Vicky I am truly sad for you two,not good with words like this so may your father rest in peace in heaven with Jesus, God bless and stay safe, at peace now 🙏🙏🙏🌠🤟😪

To a great man, father, husband and grandfather. Your son always spoke of you as a hero, legend.

I have known your son for over 25years now. You did an amazing job as a father/mentor to him and can only imagine all the great things you have experienced and done in your lifetime.

May you Rest In Peace and meet up with all your loved ones who have passed before you.

My sincere condolences to all the ones you have left behind.

My father died yesterday afternoon. He had a profound impact on the life I live today. The relationship between a daughter and a father can often be quite complicated. I was blessed to have a rather simple, yet powerful and dynamic, relationship with my dad.

My father was a hard man to like at times yet equally as hard to dislike. He was loving, caring and adored by many of the lives he touched.

It's the simple bio of a simple and modest man. But you don't measure the life of a man by simple facts, simply told.

Its been said that you measure it in the truths he learned, or in the times he cried, in the bridges he burned, or the way that he died. In his 79 years, my father learned much, rarely if ever cried, without a doubt pretty much knew when he wanted to make his exit leaving a legacy where his teachings and actions will never be forgotten.

I rarely saw my father cry. But here's how he knew he had enough life. 35 rewarding years with the Toronto Fire Department, equally sharing those years coaching women's softball, hockey and loving all other sports along the way.
He nurtured, loved and cared for my mom through serious illness for the better part 10 years plus, a fractured hip replacement, he had suffered Lung Cancer himself for 2 years, never missing a chemo or radiation treatment, even when told there were no more options he really never wanted to quit, kept fighting, continually trying to help others as his most admirable quality was his empathy and compassion to care give for others especially Mom. He was just tired and running out of steam.

Here is how I measure my father’s life.

I measure his life in his compassion and dedication to hard work. The life lessons he would teach and the size of his hands.

Without doubt he lived the life of a firefighter, day in and day out. "Firefighters never die, they just burn forever in the hearts of the people whose lives they saved."

I lost my grandfather yesterday.
I woke up this morning and still couldn’t believe that it happened.
Maybe it was the fact how sudden it was, or maybe because I had to say goodbye over video chat....Either way he isn’t suffering or fighting anymore.
I miss you already grandpa.
I wish you could have been at our wedding, and we could have danced to our song.
I love you and give grandma a kiss for me.
I’ll keep chasing my shadow for us
“When the night has come
And the land is dark
And the moon is the only light we see
No I won't be afraid
No I won't be afraid
Just as long as you stand, stand by me”

It is always difficult to lose anyone close to us. But losing our parents is just that much more difficult. For me losing my father is a profound loss. Not only was I proud to be my dad's name sake but with my Dad being a firefighter he was larger then life to me. His dedication and passion for firefighting allowing him to fulfill his need and want to be compassionate and care-giving. It was my respect and admiration for him that ignited my desire to become a nurse. During a holiday to British Columbia we worked together sharing our training to save a man's life. I could not have been prouder than I was to stand beside him that day. I will miss his sarcasm, wit and sense of humor. As his kids we know all too well where we inherited our stubbornness and competitiveness from. Dad worked hard and played hard . He was happy to see us and others do well . It was exemplified in the many rounds of golf I played with Mom and Dad. He would revel in our successes but at the end of the day he would prefer to have the better score. Regrettably some battles can't be won. Despite a courageous battle over the last 2 yrs his battle is over. Dad you will always be a
winner and that larger then life figure I saw as little girl. Rest in peace Dad I love you.

For those of you who know me well, would know just how sad it makes me to say good-bye to this man. For many years, he was “Mr. Kelly” to me. He was my softball coach, and sadly he passed this weekend. To say he was a coach does nothing to express just how much he meant to me and my team.
After being given 3 brand new, beautiful, rather large for our young hands, Rawlings baseball gloves as young kids, my sister, brother and myself really didn’t know how to “use” them? We are right handers so we naturally thought to wear them on our right hand. Wrong.
After playing 2 years house league softball, I was asked to try out for a Rep team. Tryouts were exciting for me, and what I clearly lacked in talent and experience, I made up for in enthusiasm and awe of the whole thing. By the grace and “pick of litter” by Norma, also pictured here; one of the other coaches and the team manager aka the “Heart” of our team), I was chosen to be part of the Cawthra Carley’s Softball Team. It was then, at 10 years old, I had the pleasure of knowing our Mr. Kelly, or “Vic” to some.
For the next 7 years (or so) we were not only a team, but we grew as a baseball family, with some of the same players who started in 1985/1986, playing together until most of us left. Baseball for us wasn’t a couple of months in the summer, far from it! Baseball meant indoor clinics starting in the the fall, going through the winter, resuming our season in the spring, playing all through the summer, several times a week, including tournaments all weekend, and continuing until playoffs in the late summer. We repeated this year after year. Mr. Kelly, dedicated countless hours, days, weeks, months to us. In our first year, he took us from a team of 10/11 year old girls who never played together before, all the way to becoming Ontario Champions!
As a team, we were awesome, I can honestly say that! He left all of the personality grooming and nurturing to Norma, and she fulfilled her role in taking care of that aspect of our team, and much more. He made sure we took ball seriously, making it to practices, running drills, being at every game, tournament etc. I remember after games, we would all gather in our usual post- game circle, sitting on the grass together listening to his words. He’d tell us how incredible that game was, and if it was a close one, he’d take off his baseball cap and showing us the few hairs remaining on his head, and blamed that on us 😆.
I remember him standing in the 3rd base line giving us signs as we went up to bat. I like remembering him like that, I respected and admired him greatly.

Mr. Kelly was a Fireman, a Chief as a matter of fact (someone please correct me if I’m mistaken). Though he had his fair share of commitments with work, he also had 3 children of us own, and still managed to spend a considerable amount of time with us.

While he did our team proud as a whole, I appreciated him that much more for what he did for me as an individual player. I went from a left fielder, to a 1st baseman, and with his many hours of one-on-one practice, ultimately a pitcher.
I remember him calling me up on those sweltering summer days, asking me if I could come out and “throw some pitches” for a while. Back then, our weeks were already filled with practices, games, and tournaments, so I figured I already put in my share, because I wanted “My time” too.
I grumbled by myself on the phone, but I always went. He would pick me up, take me down the street to the nearest baseball diamond. He counted off the steps between home plate and where a pitcher’s mound would be, and away i went. The hotter the days were, the angrier I got inside as him and I exchanged throws. Me pitching windmill to him, and him returning the ball so I could keep going (melting was more like it). Through the sweat, and bad pitches, he kept going. He kept those calls coming in between his busy work/home/team life and I kept grumbling inside, but I never said a word. I had great respect for him, and I later came to appreciate every single minute spent with him, as he single handedly groomed me to become a decent pitcher. When we made it to the Nationals in Quebec in 1992, I pitched 21 innings with the lowest ERA and was awarded the “Top Pitcher” (I still have the plaque to prove it lol). That was for him; all of those hours he gave of himself so I could be the best I could be, and I will never we forget that.
This past February, Norma and I had the great pleasure, and honour of joining his family members for his birthday celebration. My heart is full, as I was able to tell him “Thank You” for all he did for me. I was lucky enough to spend that time letting him know how much he meant to me and I got to tell him that I loved him before we left. I am so grateful for that.
Though we can not properly say good bye to him in person, I will memorialize him in my heart. Rest In Peace, to our Mr. Kelly. 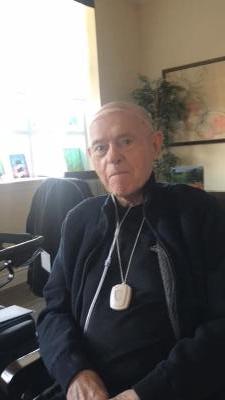 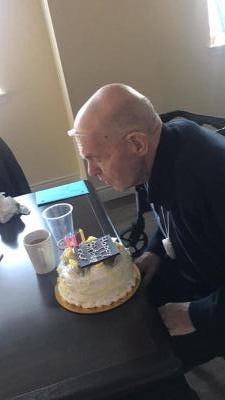 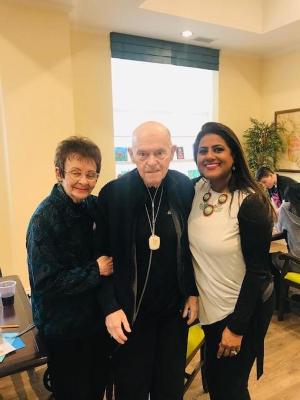 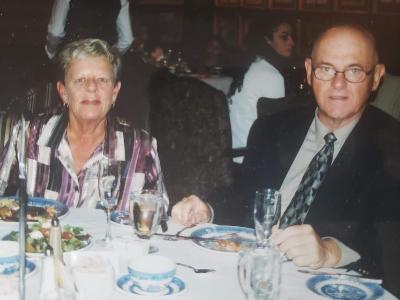