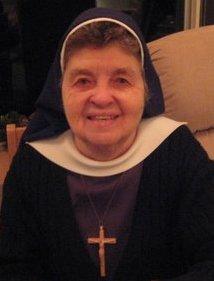 Sister Mary Irene (Stephanie) Rajca, 99, peacefully went home to her God on Monday, November 21, 2022, at Notre Dame Convent in Waterdown.
Sister Mary Irene was born on February 19, 1923, in Teofipolka, Poland to parents, Katherine and John. In 1929, her whole family with 2 older brothers, 1 older sister and 1 younger sister) moved to Canada and settled in Toronto, Ontario.
Sister Irene was one of the first Canadians who entered the Felician Sisters Community. In 1939 at the age of 16, Stephanie Rajca went to Buffalo to enter the Felician Aspirancy to complete her high school education at Villa Maria Academy. She was accepted into the Felician Community as a postulant at Immaculate Heart of Mary Convent in Buffalo, New York, on July 9, 1942. Following her initial formation, she made her first vows on August 6, 1944, and final vows on August 6, 1950.
During Sister Irene’s 80 years of religious life, she served as an elementary school teacher in the Buffalo area for 9 years. She was transferred back to Canada where she continued her education and teaching for another 28 years in the Hamilton, Welland, Niagara and Durham Boards. Following her retirement from teaching, Sister Irene assisted in the office of St. Stanislaus Day Nursery in Toronto for 6 years. She volunteered to help make lunches for the homeless at St. Felix Centre, and was proficient in teaching English to new Canadians and to a number of priests requesting to learn English. Sister Irene volunteered to go to Warsaw, Poland to teach English privately to a few sisters from 1992-1995. In recent years she served as assistant librarian and chronicler for Holy Name of Mary Convent. In 2016, she was transferred to the School Sisters of Notre Dame Convent where she received nursing care.
Sister was predeceased by her parents, John and Katherine, as well as her brothers, Michael and Joseph, and sisters, Mary and Danusia. She is fondly remembered especially by her nieces Rosanne (Michael) Kril and Maria (Richard) Grotek, grand-nephews and grand-nieces – James, Amanda, Stasiu, Jaklyn, Veronica, Raymond, Dorian and Elisha, as well as many other nieces and nephews of the Nicolak and Rajca families.
The Felician Sisters express their sincere gratitude to the School Sisters of Notre Dame, and their nursing staff for their dedicated care of Sister Irene since 2016.

Visitation will be held at Turner and Porter Neweduk Chapel, Mississauga (1981 Dundas St. W. east of Erin Mills Pkwy.) on Tuesday, November 29, from 2 – 4 p.m. The Mass of Christian Burial will be celebrated at Holy Name of Mary Convent Chapel on Wednesday, November 30, 2022, at 10 a.m. Interment at Assumption Catholic Cemetery. In lieu of flowers, donations may be made to the Felician Sisters.