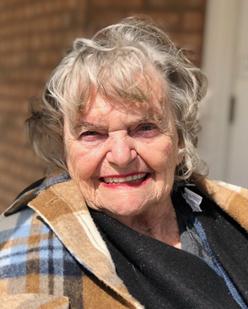 At Sunrise of Oakville on January 8, 2021 at 91 years of age. Sally was the devoted and loving wife of Doug, and the caring mother of Joan (Ed), Bruce (Carol), Katherine (Alex), Sheila, and Doug (Carla). Sally will be sadly missed her Grandchildren Monica (Kris), Julia (Younes), Edward (Jennifer), Ian (Mary), Michael (Liesa), Ryan (Courtney), Mackenzie (Michael), Sean (Andrea) and Jordan and Sara and great-grandchildren Anabelle, Amy, Harper, Hunter, Nora and Wesley. Sally was the devoted younger sister of her brother Phil(deceased) and his wife Anna Mae (deceased) and sister-in-law to Alan (Betty), Barbara (Ken) and Mary Louise who are all deceased. Sally was Aunt to Mary Jo (Warren), David (Carina), Diane (Doug), Donna, Leigh (Gary), Jackie (Ken), Kevin, Craig (Maria), Stuart (Peggy), Bob, Michael (Ruby) and Carol (Allen). Sally was originally from Haileybury in Northern Ontario where she developed her lifelong love for the outdoors and nature. She immigrated to Toronto in the early 1950s and started her career at W.J. Gage limited in the personnel department. It was during the TTC strike in 1952 when she met her dear husband to be, Douglas, while in a work-related carpool. They had a successful and happy marriage that lasted 64 years. Sally loved the Arts and was a lifelong supporter of the Toronto Symphony Orchestra, the AGO and Live Theatre shows. Sally was a very active and interested participant in the Etobicoke chapter of Learning Unlimited for many years. Sally was a devoted Roman Catholic and a very active member of St Clement Parish. A private Funeral Mass will be held at St. Clement Roman Catholic Church, on Wednesday January 12, 2022, at 10am for attendance by her direct family members only, due to the pandemic. Donations are welcome in lieu of flowers and would be appreciated to the Alzheimer Society of Canada. Link to watch the Livestream of the Mass will be available here soon.
Order Flowers
Make a Donation
Help Extend the Memorial
Order a Keepsake Book