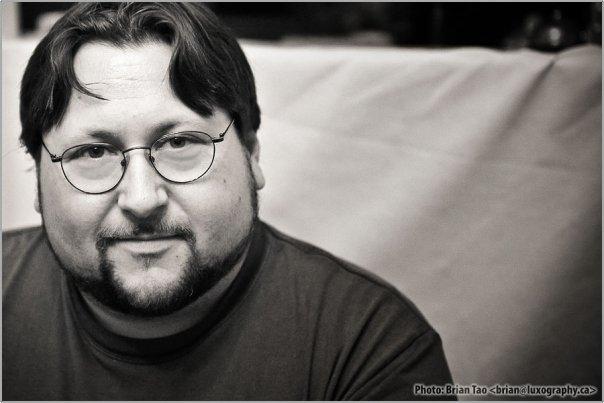 Ross Vernon Goodfellow, aged 52, only son of Gwen Barnett and the late Herb Goodfellow, and older brother to Cynthia Goodfellow. Beloved husband and bestie of nearly three decades to Roben Goodfellow. Metaphorical brother in heart and soul to many, many more. Most excellent friend. Born 1968 in Edmonton Alberta, and transplanted with his parents 2 years later to Mississauga. After not so many years as a musician (piano, drums, classical guitar), composer, writer, producer, recording engineer, martial artist and excellent friend, he died June 28 2020 at his home in Toronto. Catastrophic, immediate cardiac event - same as his father and grandfather before him. He died in the arms of his wife in their driveway, his fighting spirit and her CPR being to no avail.

He was, it is generally agreed by a fairly diverse pile of bereaved, a good person, particularly loved by children and animals whose lack of veneer he appreciated. Ross was special, clever, kind, and dear. The last eight years of his life were marred by medical misadventure and pain, pocked by a cumulative two years of inpatient care, but still he kept his spirits up and wished to continue and contribute to the communities around them. He studied and taught sword and dagger. He made good art. He encouraged others to be happy. He survived so many unlikely things that his friends began to think of him as possibly immortal, and earned him the nick name 'Rossputin'. He continued making films with his wife, and in collaboration with local producer and actor Jordan Heron. He won two awards on the international film circuit for cinematographer in recent years, which only made him want to get better and better at his craft.

He leaves behind him many an unfinished task, as is proper for a man of ambition and expansive talents. His loss is felt keenly among his communities, including the Academy of European Medieval Martial Arts, the Harley-Davidson Owners Group in Toronto, the Wiccan community, eventually the slightly more spare and online Atheist community, his partners and connections at Barn 11 films, and anywhere rye is consumed and good natured laughs are had in quantity.

In respect for the ongoing pandemic and care for the health of his community, his memorial was online. In lieu of flowers, the family requests that y'all take care of your damn selves. Vegetables, walking, kindness, the works. Share a cup of tea with a friend. Plant a tree. Try something new.