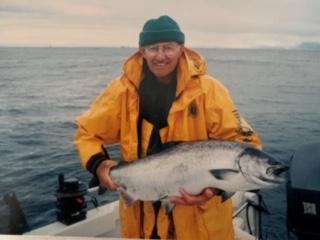 Ron passed away peacefully on February 24, 2020 at the age of 89. He is survived by his daughter Yvonne, sons Trevor and Alan, daughter in-law Michele, and his grandchildren Michael, Ethan, and Ellie. Ron was predeceased in 1996 by Nancy, his wife of 42 years.

Ron liked to keep fit by walking, and when he was younger, cross-country skiing with the boys in the winter. In his retirement years, he became an active member of the Galt Curling Club. Ron was an avid fisherman making annual fishing trips with family and friends for salmon and Lake Trout in Ontario, and halibut in the Queen Charlotte Islands in British Columbia. He was adored by his grandchildren and enjoyed spending time with them.

Ron was born in Colwyn Bay, Wales on January 29, 1931. As a young man, he became a member of the Welsh Guards and after the war, he learned the masonry trade from his uncle Llewellyn. Ron and Nancy immigrated to Canada in 1956 originally settling in with friends in Niagara Falls. Ron applied his masonry skills in the local building trade, but eventually moved to Cambridge, Ontario to join Shaver Poultry Breeding Farms where he started his career in poultry breeding. He became an expert in his field regularly travelling around the world to support customers. He also became a sought-after speaker on poultry breeding frequently speaking at the University of Guelph.

After retiring from Shavers, Ron enjoyed many years of consulting. He eventually moved to a retirement home in Calgary, AB to be closer to his sons and family. He later moved back to Ontario to live out the remaining years of his life. Sadly, Ron struggled with dementia in his later years, but he remained a gentle and happy soul touching many people until the very end.

Our family is grateful for the care of the hardworking staff at the Walden Circle Retirement Home and the Wenleigh Long Term Care Residence in Mississauga. The family would also like to thank Yvonne Ali for all her support in making Ron’s final years bright and comfortable. Ron will be greatly missed by everyone who knew him.

In lieu of flowers, donations can be made to the Alzheimer Society of Canada.