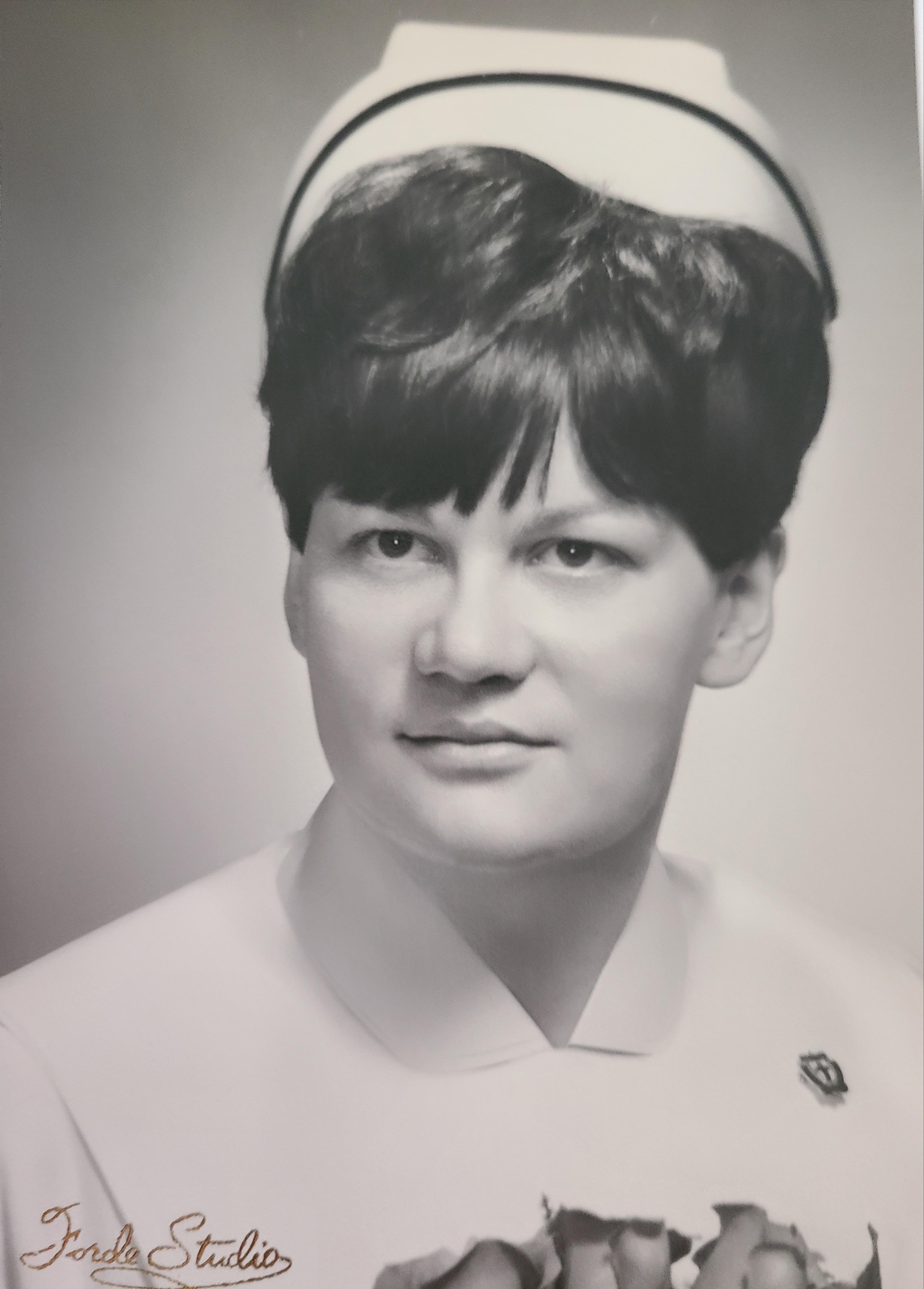 Nora Gorwill Bridle passed away unexpectedly on October 14, 2020 at the Toronto Western site of the University Health Network. At the time of her passing, she was 76 years old and resided at Kensington Gardens in Toronto.

Nora's parents, Dr John (Jack) Gorwill and Margaret Ross met at the University of Western Ontario in London. Nora was the third of six children born to Dr. John (Jack) and Margaret Gorwill – Hugh, Ellen, Nora, Joan, Ruth, and John. Nora Jean Gorwill was born on August 23, 1944 in London and raised in Seaforth.

After high school, Nora attended nursing school at St. Mary’s Hospital in Kitchener. She graduated as a Registered Nurse In 1967. She started her Bachelor of Science in Nursing at Lakehead University in Port Arthur, but decided not to complete it.

In 1969, Nora married James (Jim) Bridle of Goderich, Ontario. They began their married life in London. Joanne Ruth Bridle was born in 1970. The family moved to Huron Park and then to Zurich, Ontario in the early 1970s. Nora and Jim separated amicably on their 20th wedding anniversary in 1999. Nora took great pride in Joanne's academic accomplishments and career and was always her biggest supporter.

Nora’s calling as a nurse was in mental health and she held her RN CPMHN (c) nursing designation. She worked at the Goderich Psychiatric Hospital and then transferred to the London Psychiatric Hospital. The majority of her nursing career was at LPH, where she developed many lifelong friendships. When she retired, she worked part-time at Huronview Home for the Aged in Clinton. Nora was a highly competent nurse, and took the care of her patients very seriously. Her opinions were well-regarded by the psychiatrists and physicians with whom she worked. She enjoyed mentoring graduate nurses and care staff. Nora shared many hilarious stories and exploits with her family, which I am sure are cherished memories with her colleagues. Joanne had the opportunity to visit Nora regularly at work at LPH during her university years, and as a summer student in LPH Food Services, and understood the important role Nora’s “work family” played in her life as friends and her support network.

On her drive to work at Huronview one day in 2005, Nora felt something wasn’t right with her leg. When she arrived at work, she was unable to walk. After initial fears of a stroke were allayed, she learned she had a pinched nerve in her back. Nora was fiercely independent, so made changes to her house so she could continue to live at home.

Nora truly cherished her grandson, Ryan Przeciszowki. She had recently returned home from hospital and was adapting to her limited mobility when Ryan was born prematurely on September 21, 2005. Nora came to Toronto by transit van to meet and hold her grandson in the Neonatal Intensive Care Unit. He stole her heart. The family would bring Ryan from Toronto to visit Nora in Zurich regularly.

About 7 years later, Nora's mobility had declined and she was falling frequently. Her care team would not allow her to return home when she was hospitalized after a fall. Nora moved into the Ritz Lutheran Villa in Mitchell, Ontario where a bed was immediately available. The loss of independence was heartbreaking for her, as was the role reversal from being the nurse and caregiver to being the recipient of care. Nora quickly became a vocal advocate for residents’ rights.

Nora wanted to be closer to her daughter, Joanne, and build a strong relationship with her grandson, Ryan. Joanne was overjoyed when Nora’s name came up on the waiting list at Kensington Gardens in Toronto about a year later. While it was hard for her to be away from her friends and Stephanie’s family, Nora had to opportunity to visit with Joanne and Ryan regularly in the evenings after work/school and on weekends. In the recent years, Ryan would take transit from Mississauga and visit his Nana Nora once a week after school. Nora loved these visits. With the COVID pandemic, we were unable to visit. Nora switched to daily calls to Ryan and Joanne to check in and catch up on the day’s activities. Joanne and Ryan surprised Nana Nora with an in-person visit on her 76th birthday in August. It was a truly special day that Ryan cherishes in his memories.

When Nora moved to Kensington Gardens, a 350-bed LTC home in Toronto, Nora resumed her advocacy for her fellow residents. Bill O’Neill, the VP of Kensington Health, astutely channeled her energy into residents’ council and engaged her in various initiatives. Nora was the President of Resident’s Council at Kensington Gardens and involved in OARC (the Ontario Association of Residents’ Council).

While was a retired nurse “on paper,” Nora never stopped nursing. As a resident, she observed her fellow residents in the dining room, during visits, and at events. If she noticed any concerns that required a change in care plan, she advocated to ensure the resident's needs were met. She would regularly weave the questions of a mini mental exam into her conversations with her fellow residents.

Nora was an avid reader and also loved to knit, crochet, bake, and cook. She taught Joanne to read before she started school and fostered a love of learning and reading in her. Nora was overjoyed when Ryan also learned to read before kindergarten and kept up the tradition. Nora was a regular client of the library in Zurich. When she moved into care, Joanne became Nora's de facto librarian. To keep ahead of Nora’s speed reading, and ensuring the books would interest her, Joanne would go on regular weekend book shopping trips and do online searching for used books.

Nora maintained relationships with her many close friends from childhood, summers spent at Camp Onawaw, nursing school, throughout her nursing career, friends from Zurich and area, her care teams, and fellow long term care residents. To stay in touch with her large network of friends and family, she was active on Facebook and Messenger and enjoyed phone conversations to catch up with folks. Nora spoke daily to her closest friend, Carroll Goudie, for many years.

During her life in Toronto, Nora was admitted to the Toronto General and Toronto Western sites of UHN many times. Each time, she received exceptional care to help her rebound and recover. Mom was admitted on Thursday October 8th with a serious infection. When I visited her during her stay, she was a bit confused but stable. I received a call at 2AM on Wednesday October 14th telling me that my mom had passed away. I raced to the hospital to say my final, heart-wrenching goodbye. The empathy and support I’ve has received from TeamUHN has been deeply appreciated.

Nora is survived by her daughter, Joanne Bridle, and her cherished grandson, Ryan Przeciszowski, of Mississauga. She played an active role in their lives and will be deeply missed.

Nora is also survived by her eldest brother, Dr. Hugh Gorwill and his wife Carolyn of Kingston, and her younger sisters Joan Kalechstein of Deep River, and Ruth Van Rooijen of Brockville. Nora is predeceased by her father, Dr. John Alexander Gorwill (1981), and her mother, Margaret Robson Ross Gorwill (2007). Nora’s older sister and close friend, Ellen Gorwill Williams, died suddenly in 1994. Ellen’s husband, Carl Williams, passed away in 2012. Nora was shaken by the sudden passing of her youngest brother, John Gorwill, in 2012 at the age of 59. John is survived by his wife, Lynn, who resides in Elora. Nora is also predeceased by her brother-in-laws, Joe (Johan) Van Rooijen (2014) and Wally Kalechstein (2015).

Nora is survived by many nieces and nephews. She enjoyed receiving updates on their families and accomplishments. The children of Dr. Hugh and Carolyn Gorwill are Dr. Susan Gorwill (Len Griffiths) of Mississauga, Ann Gorwill of Toronto, Tom Gorwill (Madame Justice Christine Pallotta) of Mississauga; the children of Dr. Wallace and Joan Kalechstein are Simon Kalechstein of Toronto and Dr. Sara Kalechstein (David Depooter) of Cranbrook, BC; Peter Van Rooijen (Allison) of St. Catharines is the son of Joe and Ruth Van Rooijen; Jacklyn Cutten (Bill) is the daughter of John and Lynn Gorwill. Nora is also survived by grandnieces and grandnephews.

“Family isn’t always about blood. It’s the people in your life who want you in theirs…” Nora developed a close bond with Stephanie (Peters) Hugill of Seaforth after the sudden passing her close friend, Maxime Peters, Stephanie's mother, in 1989. Nora was the proud Nana of Stephanie and Doug’s children, Alexa and Cole.

In keeping with her wishes, Nora will be cremated and interred at the Maitland Bank Cemetery in Seaforth beside generations of our family.

Nora had a lifelong distaste of floral arrangements, particularly chrysanthemums and gladiolas as they reminded her of funerals. This was a decades-long running joke with Joanne. Nora would no doubt have laughed and been relieved that she dodged traditional funeral floral arrangements as we are unable to safely gather and celebrate her life due to the COVID-19 pandemic.

If you would like to make a donation in Nora's memory, donations to the Kensington Gardens' Residents’ Council through the Kensington Foundation or to the mental health charity of your choice would be welcome.

Nora’s sense of humour, intelligence, and compassion will be deeply missed by everyone who knew her. She was a selfless and humble person, and had no idea the positive impact she had on so many people. Her passing has left a huge void in our lives. Ryan and I have deeply appreciated the comments and tributes on Facebook and the calls and messages we have received. These shared memories have provided us with a sense of community during these times of COVID isolation, which has been deeply meaningful. We would welcome you to share your stories on the Turner & Porter site, by Facebook, or by phone.