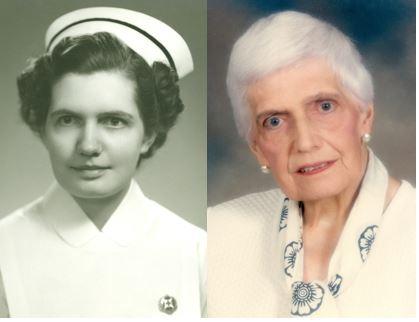 Loving mother of Dr James ’Jim’ Rogers (Cheryl) and Elizabeth Anne Rogers (the late John Stransman) who survive her along with the Stransman grandchildren Steve (Ashley), Pete (Emma) and Lindsay (Jeff); loving aunt of Patricia Henry (Michael) and great aunt of their sons Mike and Alex.

Marion had fond memories of growing up in the village of Clifford, Ontario. She attended high school in the neighbouring village of Harriston for her Grade 13 year and then entered the Toronto General Hospital School for Nurses. She graduated in the class of 1947 (September Section) and was awarded a scholarship for a subsequent year of post-graduate study in the field of nursing education.

She and Harold married in 1950, and lived in Leaside, Ontario. In 1954, the family moved to Montreal, and then in 1965, to Etobicoke. After Harold’s death in 1970, she returned to nursing and had a successful career with the Regional Schools for Nursing Assistants, up to the time of her retirement in 1990.

Marion saw family as the foremost concern of her life. Harold’s sudden death was a turning point that she accepted with her characteristic determination. Her journey was not easy but she was rightfully proud of her accomplishments and came to view this as a rewarding part of her life experience.

She was interested in people and formed lasting friendships wherever she lived. As she put it, she “embraced traditional values along with a gracious acceptance of societal changes”. Her many interests enriched her life. She enjoyed needlework, as long as her hands and eyes allowed, and after retirement gave serious attention to mastering the rules of bridge. She was a diligent amateur genealogist and an avid CBC Radio listener. When the occasion arose, such as a colleague’s retirement or a nursing class reunion, she found great pleasure in composing celebratory poems. Her most recent literary endeavours were memoirs of village and church life in Clifford.

Royal York Road United Church was her church home for 55 years. She was active in many aspects of church life including the choir. She was especially proud of her leadership role in the Church School and grateful for her personal connection with the congregation’s young people.

Our family thanks Dr. Marica Varga, Dr. Denise Wong, and Dr. Jessica Zive. Marion enjoyed her relationships with the many amazing caregivers who helped her. We are deeply grateful to them and make note of the dedication and warmth shown by Delma and Ruth over many years, as well as, by Loida and Tsering more recently.

A service celebrating Marion’s life will be held in the coming weeks, with limited attendance and live streaming. A private graveside service will take place in Clifford in the Town of Minto at a later date. Arrangements have been entrusted to Turner & Porter Yorke Chapel. Flowers have been gratefully declined at Marion’s request. Donations in Marion’s memory to Royal York Road United Church, Covenant House, or the charity of your choice would be appreciated as expressions of sympathy.
Order Flowers
Make a Donation
Help Extend the Memorial
Order a Keepsake Book