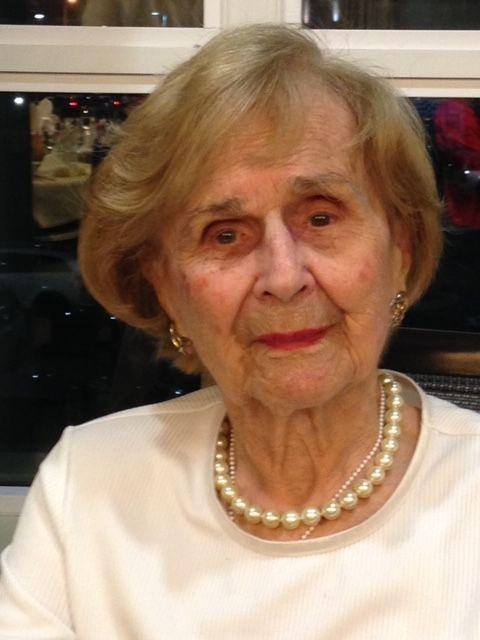 With great sadness, we announce the passing of our mother, at the age of 100, on Saturday, September 12, 2020, at Trillium Mississauga Hospital.

She was married to her late husband, Horace, for 59 years. She was the beloved mother of Nancy Bunker (Charlie) and son Robert (Ann); and grandmother to Robert (Angela), Jennifer (Andrew), Christopher (Cynthia), Christine (Bryce) and Kathryn (Justin); nine great-grandchildren called her “GG”. She loved them all and somehow managed to keep up with the grandkids in their formative years.

Dorothy is survived by her sister Mary, and was predeceased by her brother Harold, and her sister Elaine.
Dorothy was born in Kitchener on March 19, 1920. She raised her family in Oakville where she and Horace established lasting friendships though Grace Lutheran Church. In their younger years, they loved to dance to big band music, and later became members of a square-dance group where they met other life-long pals. Her dearest friends in later decades were Betty and Wilma.

She said many times that the most enjoyable part of her life was her 20 years of country living in Campbellville where she ran an antique shop, The Nook & Cranny.

Plays at Stratford, especially Shakespeare, were important to her, and she went there several times annually for at least 20 years. She and Horace travelled to England, the Mediterranean, the Caribbean and Portugal, and saw much of Canada and the USA.

Her family were surprised when, in her 50s, she began taking adult education university courses, often driving long distances to do so. Although not a born athlete, she golfed and sailed with Horace, and went camping and skiing with the family.

She was sharp with numbers, which probably helped her as an avid duplicate bridge player through her adult life until her mid-90s; she often played with three different groups in a week.
To the PSWs, nurses and doctors at Bough Beeches Place in Mississauga, who took great care of Dorothy for the last four years – a big THANK YOU!

Donations in Dorothy’s memory may be made to the Stratford Festival or a charity of your choice.
Order Flowers
Make a Donation
Help Extend the Memorial
Order a Keepsake Book