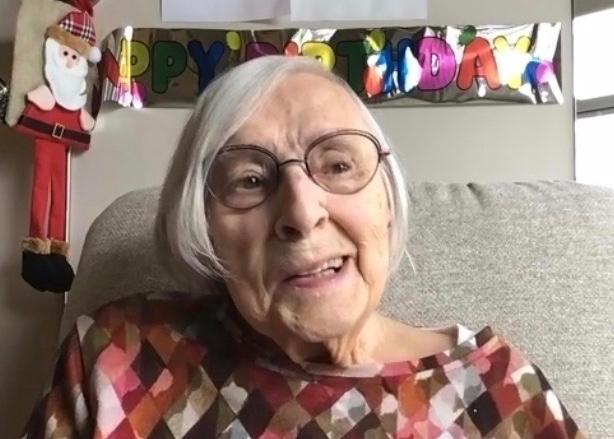 It is with great sadness that the family of Joan Taylor announces her passing on Wednesday September 14th, 2022 at the age of 96 years. Joan was born in Toronto and was the beloved daughter of Robert and Jean Smith. Joan grew up in Toronto, going to Dewson Street Public School and Harbord Collegiate.

She met Edward Earl “Sonny” Taylor when he was delivering lunches to her father’s electrical business. They married on June 2nd 1945 while Earl was on temporary leave from his service with the Royal Air Force in England.

Following the end of World War II, they set up their home in the top two floors of Joan’s mother’s house on Shaw Street in Toronto. They saved for many years and purchased their first home in the Rexdale subdivision of Etobicoke in 1961. Once they were empty nesters, they moved back to the city, living in the Jane and Dundas area for more than 30 years.

In addition to being a caring wife, a dedicated and loving mother and grandmother, Joan was a talented seamstress making most of her children’s clothing. When her children were older, Joan put her creative talents to work in the drapery department at the Hudson Bay store at Bloor and Yonge Street, where she made many lifelong friends.

Joan was also a talented fabric artist, crocheting many granny square blankets for her family. She is well known for her many teddy bears and dolls that she designed and sewed herself. Joan had an amazing sense of colour and pattern in the incredibly detailed clothing she designed for her whimsical creations. Everyone had a unique personality, seemingly with a back-story all its own. She would shop in miniature stores where something as simple as a toy camera or parasol would inspire another character. Joan also had a passionate love for opera, and was a Canadian Opera Company subscriber for many years.

Joan will be forever loved and deeply missed by her children, Karen and her husband Stan, Janice, Catherine, Pat and her partner Brent, and Tim and his wife Anne. Joan was a caring and proud grandmother to Kara, Todd, Emery, Andrea and Julia, and great-grandmother to Ellie.

Joan is predeceased by her husband, Earl and sister Roberta Cotter.

Cremation has taken place. Following Joan’s wishes, a small family gathering will be held at Turner and Porter’s Butler Chapel in Toronto.

On-line condolences may be shared at https://turnerporter.ca/memorials. Friends planning an expression of remembrance are asked to consider the Women’s Legal Education and Action Fund www.leaf.ca.
Order Flowers
Make a Donation
Help Extend the Memorial
Order a Keepsake Book