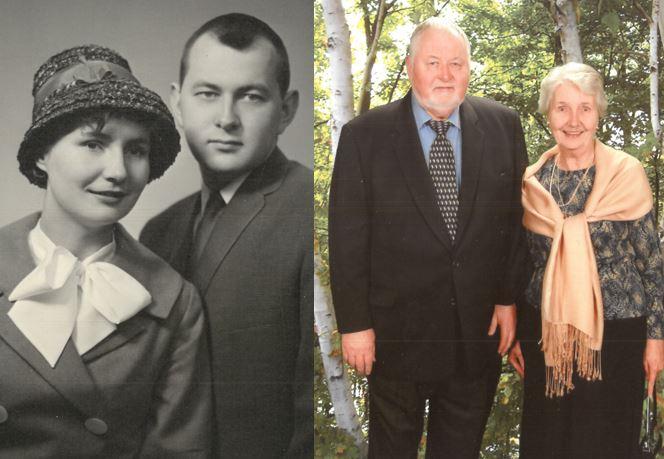 It is with great sadness that we announce the passing of our parents.

She was born in a young fledging country of Latvia before WWII and Soviet Rule, which interrupted for fifty years its aspiration of being an independent nation. Her father Arnolds Jansons was an electrical engineer BSc. University of Latvia and MSc. Budapest, Hungary and MS Stanford, California. Arnolds was employed at VEF.

The family fled the oncoming communist onslaught in 1944 only to face Allied bombings of Germany. The post war years were spent in various internationally created Displaced Person Camps to deal with the tens of millions of war refugees.

The International Refugee resettlement effort was supported by religious communities around the world like the International Lutheran Refugee program which found a congregation in Indianapolis, Indiana willing to shepherd the Jansons, and others, through the process of becoming Americans.

The success of that process is shown by the success of the people who went through it. Father Arnolds retired from a manufacturing facility known as Naval Avionics and was a high-level rocket scientist. Mother Mirdza created a beautiful home and garden. Our family often made that trek from Toronto to visit this little oasis on a lake.

Being smart, athletic and competent, Ieva graduated from Shortridge high school and received her BA. in business administration at Indiana University. She worked as a manpower Analyst both in Indiana and in the Ministry of Labour in Toronto.

All while raising three rambunctious boys and a girl, Mara, who was born with Downs syndrome. Even so, Mara proved to be able to meet her challenges and challengers so that the family has had a loving and wonderful sister all along.

Ieva particularly disliked forced retirement at the age of 65 but occupied herself with reading, attending lectures and being the driving force that kept her family active and thriving. Despite several severe illnesses she kept to what she claimed was the Jansons’ family motto “immer geradeaus”, always straight ahead.

John’s family also fled Latvia in 1944 and made their way to Esslingen in Bavaria. Our father fondly remembers the American soldiers allowing him to ride up top on their tanks. The family emigrated to Toronto in the late 1940’s. John’s father Janis was a jack of all trades and soon figured out how to buy, renovate and flip homes. His mother Zenaida managed their home. John became known as one of the toughest yet most trustworthy kids on River Street.

John loved athletics. Star basketball player at Jarvis Collegiate from which he graduated. However, it has been said John perfected the jump shot without ever leaving the ground.

We do not know what led John to pursue his academic studies at Indiana University. Perhaps a shot of being on the basketball team.

John was the initial treasurer during the inception and building of the Skydome and could regale you in countless memories of the Blue Jays games.

John proudly attended the National Defense College in 1984-85. That is where he and Ieva developed their love of travel.

Soon after John opened his own travel office, Kravis Travel, and loved reuniting many of his clients with their loved ones around the world, so much so that he would extend credit where others refused. The long-time joke in our family was that John could manage the millions but not the pennies!

His generosity went further devoting much time and effort as a proud member of the Latvian academic fraternity “Latvia”.

Throughout his entire working career, he helped so many get their first break or start in the real working world.

Towards the end of their lives, in failing health, they continued their love for one another and daughter Mara as they strove to maintain independence and dignity. So befitting that they passed away three days apart.
Our families wish to thank the incredible nurses, doctors and support staff at the Toronto General and Toronto Western Hospitals who made their passage into the next world peaceful and pain free.

A private family service will be held at Turner and Porter Funeral Home 2357 Bloor St. West February 14 with a link for livestream. When conditions permit, a celebration of their lives will be organized.

In lieu of flowers, please consider a donation to Community Living Toronto in honour of Ieva and John’s daughter Mara who has been supported by the association for many years. Visit www.cltoronto.ca or contact 647-588-9465.