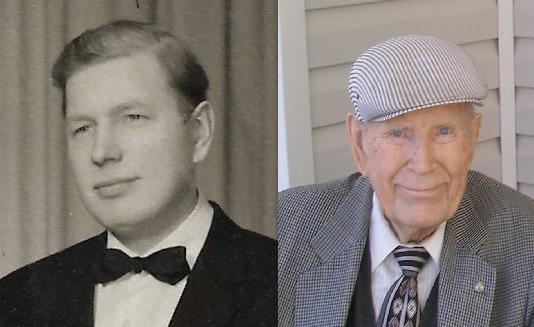 It is with great sadness we announce the passing of Harijs on Thursday, April 8, 2021 at the age of 95. Beloved husband of the late Velga. Loving father of Maris (Laurel), Peter (Nash), Karlis (Katherine) and Rita (predeceased). Devoted grandfather of Janis, Andra, Denver and Savannah. Uncle, Godfather and Friend to many.

Harijs was born in Liepaja (Latvia) and was an ardent Baptist and Latvian. His pacifist father went missing early and eventually died as a prisoner of the communists in Soviet Russia leaving Harijs and his brother half-orphans. When the communists invaded in 1939 he helped his older brother (Teovils) print flyers to agitate for their exit. Then when the Nazis moved in, they simply ran the presses to foment against that invading force. The result was the arrest of his brother and the rest of the group who were send to concentration camp. Harijs was also provided with a week in jail from which he was able to bluff his way out. This gift of the gab was to serve him well in life.

With the changing winds of war he was shanghaied into the German army together with the rest of his brother’s group who had been released from concentration camp (Teovils having died as a result of the incarceration). While serving in Italy a mortar landed beside him but luckily a donkey took most of the explosion and Harijs survived, being wounded by a few pieces of shrapnel.

After numerous adventures and a spell in a POW camp he landed in Canada in 1948 and served his immigration requirements in both a lumber camp in Northern Ontario and then on a CN rail gang out of Winnipeg. It was in Winnipeg that he met Velga Zaļais, the love of his life and bride of 70 years. She had a similar background of being a Latvian Freedom Fighter. He went from being on his own to becoming part of Velga’s family.

From meager beginnings in Winnipeg where Maris was born, the family moved to Toronto where Harijs’ career started in earnest. He was a naturally gifted architect and designer (despite no opportunity for university). Being very good mathematically and on the drafting table, he also showed his skill at organizing construction, soon becoming the general manager in charge of construction in the 1960’s for Fidinam (Direzione Lavori). Many of the high-rise structures built in the 60’s in downtown Toronto have his stamp on them, such as The Hudson’s Bay Centre at 2 Bloor Street East. For the latter part of his career he was Chief Property Estimator/Manager with City of Toronto.

During this time, he maintained a healthy family life, good friendships, strong Baptist faith and Latvian community activity. He was generous to family, friends and his community with both time and financial support. In their first house on Pacific Avenue the family helped many friends with room and board. The first family cottage was built in pieces in the backyard of that Toronto home then trucked up to a lot just outside of Port McNichol and assembled in a day. Prefabrication before it was developed! Many relatives (especially our cousins the Brencis family) and friends would come and stay: the big event for all the young ones was Friday evenings trundling up the main road to greet Harijs as he always had toys and things for all. He would officiate at the Saturday night campfire where we dined on burnt marshmallows and hot dogs.

When it came time for a new Latvian Centre he was instrumental in finding and then renovating the current Centre at 4 Credit Union Drive. After many renovations and being the President of the Centre several times he took a hand in the kitchen, serving innumerable meals. In addition to these contributions, with acting in plays, organizing art exhibits (Velga’s pottery) and helping with the Centre, he left quite the mark on Latvian society.

When Peter decided to extensively expand his store on Prince Edward Island, Harijs undertook to design it and then helped build part of it. We suspect that his love of eating lobster enticed him so many times to PEI. He was happiest both designing buildings and then seeing them realized. When mobility precluded his attendance in PEI he built a lap based drafting bench to allow him to design from his favoured easy chair. Designs would be scanned and emailed to PEI for implementation. When Maris, Karlis and Rita required help with their respective homes it was always provided. He also designed cottages and houses for friends including a home for niece Mārīte in the United States. He was quite daring and would often go up on roof tops or climb rickety ladders to get a job done.
The Baptist faith was never forgotten and the youngest children were raised in the faith in the Latvian congregation. He was an elder in the church from the 1960’s right up to when he was in the nursing home and would audit the congregation’s books every year.
He was both good not only with designs and numbers but also poetry and prose, often writing things to present at the various weddings and functions. Harijs had a clever turn of phrase and usually had a jingle in his step. He was a voracious reader and loved his puzzles: including teaching chess to two of his sons. Growing up in poverty, Harijs’ mother still found the capacity to rent a piano so that her two boys would have music in their upbringing. He purchased an accordion with the first $50 earned working for CN. He loved to paint large pictures on the back of old blue prints (he was loath to throw anything out) with his kids. Harijs and Velga would task the children with numerous sayings, riddles and homilies. There was always music, literature, art, and science in our home. And while at Kristus Darzs Latvian Home he would often regale the residents and staff with poetry fit to the occasion, usually recited from memory. His mind functioned well into old age and even a week before passing showed a cleverness not often seen.
Harijs was a patron to many artists including Tom Hodgson, Visvaldis Reinholds and Gundega Cenne.

His best quality was his love for and attentiveness to Velga. When her health started slipping after the loss of Rita, he kept a constant eye out for her and managed her welfare until their early 90s when they moved to a nursing home, where Velga was still his constant focus. Theirs was a love that endured, even themselves.

A private family service was held at Turner & Porter Yorke Chapel, 2357 Bloor St. W., at Windermere, on Thursday April 15, with a graveside service and interment at York Cemetery, North York.

Donations (in lieu of flowers) in memory of Harijs may be made to Kristus Darzs Foundation.
kdlatvianhome.com/donate

Please see link below for the livestream of the Funeral service: https://youtu.be/3XoA4ZH2Mi8

Online
online, Toronto, ON, M6S 2V3 Get Directions
Thursday, 15 Apr 2021 1:00 PM - 2:00 PM
Info: The livestream link for the funeral service at is as follows; https://youtu.be/3XoA4ZH2Mi8 Please do not come to the chapel, as visitors will not be allowed in.
Order Flowers
Make a Donation
Help Extend the Memorial
Order a Keepsake Book