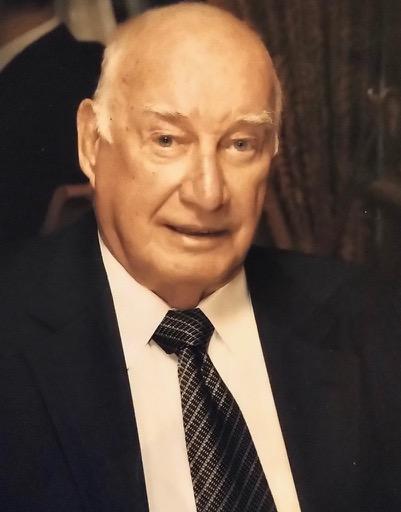 With heavy hearts we announce the passing of Graham McMath who died on Tuesday July 7, 2020 at Credit Valley Hospital. Graham will be dearly missed by Marlene, beloved wife and companion of 61 years, and by his three children and their spouses, David (Cathy), Stephen (Brenda) and Maureen (Peter). He was pre-deceased by a daughter Karen. He was a cherished and much loved grandfather to Tyler, Lauren, Hunter, Lillian and Jonah, whom he was fortunate to see grow up and thrive.

On April 5, 1932, Graham was born to Maude and Fred McMath, a hard-working couple from County Antrim in Northern Ireland who had taken up residence in Toronto’s west end Bloordale neighbourhood. Graham was an only child and very fond of his fun-loving mother whom everyone called Maudie.

As a young boy Graham attended Pauline Public School where he met his life long friends, Gord Speirs and brothers Bill, Jack and Jimmy Hall. Later he would go on to attend Bloor Collegiate and East York Collegiate where he excelled at high jump placing at the city finals.

Like many of his generation, Graham was raised to value hard work and the importance of making his own way in life. As a youth he delivered three different editions daily of the Toronto Telegram and Toronto Star newspapers. He perfected his aim as he rode his bike along his route throwing the papers onto front porches.

As a young man Graham delivered ice blocks for both Purity and Lake Simcoe Ice. He went on to own his own ice delivery business which he operated for close to a decade. With more and more folks opting to buy electric refrigerators, business-savvy Maudie, encouraged Graham to transition to residential real estate.

At the tender age of 19, Graham would meet the love of his life, our mother Marlene (née McDonald). Marlene was beautiful and stylish; the two of them made a fine looking couple when out on the town, at Saturday night Maple Leaf’s games at the Gardens or dancing at the Palace Pier.

They dated on and off for a couple of years before finally taking the plunge. On February 28, 1959, their wedding at Bonar Presbyterian Church was followed by a joyous celebration at the Old Mill.

Before long Graham and Marlene welcomed their first child, Karen Lynn. Sadly Karen was only with them for a few short months before succumbing to Cystic Fibrosis. It was a difficult period but their strength and fortitude along with the love and support of family and close friends enabled them to move forward. In time they celebrated the births of their sons, first David followed two years later by Stephen. To round off the family they welcomed their daughter, Maureen five years later.

For over 40 years Graham and Marlene acquired properties and managed them, Graham leveraging his problem-solving abilities and work ethic, and Marlene her organizational skills. Although they worked tirelessly, family was the focal point of their lives and they always ensured there was plenty of time together. Magical summers were spent up north at the family cottage on Cameron Lake in Fenelon Falls, which they owned for 35 years. It was a rare weekend when our parents weren’t hosting friends and family up north. Horseshoes tournaments and competitive euchre games were the norm with their friends.

Never one to sit idle for long, Graham often had a handyman or building project on the go, enlisting the help of his boys as they got older.

In the early 1970s, Graham bought a farm in the Orillian countryside where for a number of years he grew trees on the back acreage. Later our parents pulled up stakes and bought a property on Lake Couchiching not far from the farm. While not a "cottage" in the tradition sense, it was more a family retreat for the growing McMath clan. Throughout the summer you could find the two of them on their lawn tractors or tending to the grounds. Dad loved to tinker out by the garage, washing and polishing one of his classic automobiles, many of which were prize winners in the annual Orillia Classic Car Show. He always had a keen eye for a stylish vehicle from the time he first got his drivers license at age 14. One acquaintance recalls a particularly beautiful '52 Buick he owned and cherished as a young man.

In the winters, Graham and Marlene escaped to Florida where they were active members of their condo community helping to organize the annual White Elephant sale and sports week. In later years they also enjoyed cruising the world with friends, visiting far-flung destinations in Asia, South America, Alaska and Europe.

Wherever our father was, his upbeat manner and welcoming personality attracted people. He was never one to shy away from sharing his opinion, which wasn't always appreciated by some, but he was always there with encouragement and a helping hand when needed and a quick laugh.

Our father did not wear his heart on his sleeve, but his kind and generous nature shone through in his deeds. He was devoted to his family, in particular to all his grandchildren whom he adored. His was a life well lived and he will be sorely missed by those fortunate enough to have known him. We love you and miss you, Graham, Dad and Papa.

A private service for Family

Get Directions
Monday, 13 Jul 2020 12:00 AM
Info: Due to Covid-19 restrictions we are not able to have a larger funeral. A celebration of life will be planned for a later date once it is safe to gather in larger numbers.
Order Flowers
Make a Donation
Help Extend the Memorial
Order a Keepsake Book