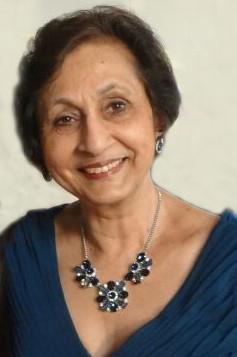 Maria Eugenia (Genie) Gomes (née Colaço). Suddenly but peacefully on Sunday, October 27, 2019. Beloved wife of Neil. Devoted mother of Nadia, Renée, and Melissa. She is also survived by her loving siblings Mario (Sharmila), Filipe (Lorna), and Prisca Colaço, and her siblings-in-law Hazel (the late Noel) Cardoza, and Frank (Ronette) and Glenn (Marie Celeste) Gomes, as well as a close-knit family of nieces, nephews, and cousins. Predeceased by her parents Francis Xavier and Mildred Colaço and her in-laws Aloysius and Prisca Gomes.

Genie was born in Bombay, India in 1945 and grew up in Byculla in a home with a large family of siblings and cousins. She earned a Bachelor of Arts and Master of Arts in Sociology from Bombay University, and in 1969 earned a second Master of Arts from the University of Pittsburgh. She held Assistant Professor positions at Aquinas College in Michigan and Dunbarton College in Washington D.C. amongst other teaching roles in the United States before returning briefly to India. In 1976, she moved to Toronto, married Neil, and started a family. She was a devoted homemaker for several years and was happy to return to work when her children were in school full time. She was a proud Canadian and a committed employee of IBM - Watson Health Imaging, who enjoyed cooking, music, and spending time with her extensive network of friends. Genie will be remembered for her sharp wit, contagious laughter, welcoming home, and strong Catholic faith. She was the rock of her family and was most happy when surrounded by relatives from around the world.

In lieu of flowers, masses may be offered for the repose of her soul, or donations may be made to the Heart & Stroke Foundation of Canada.