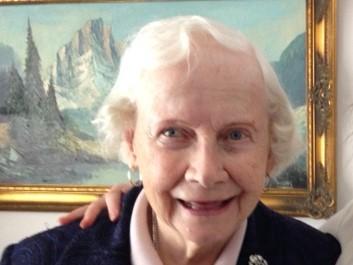 A grand family reunion is underway in Heaven after another dear member of the Dowlings and MacDonalds joined the kitchen party. Elizabeth (Betty) MacDonald, 93, died peacefully in Toronto on Aug. 24 after a brief illness with cancer, which she faced with bravery and dignity. Beloved wife of the late Leonard A. MacDonald and loving mother of John (Kim), Mary Rose (Steve), Michael (Laurie), Jim (Mary Jane), Connie (Tom) and Roddy (Iva). Devoted grandmother to Anna (Jeff), Caitlin (Jason), Bronwyn (Deegan), Emma Rose, Danielle (Alex), Jillian (Alex), Casey and Shayla, and great-grandmother to Leif, Ezra, Willa and Bēow. Betty is also survived by her sister-in-law Kathleen Dowling of Castro Valley, California, and many nieces and nephews in Canada and the USA, who treasured her friendship.
Betty was born in 1926 in Winnipeg to the late Michael and Anna Dowling, who raised her in a loving home on Lipton Street with siblings Edward, Kathleen, Margaret and Robert, who predeceased her. The family enjoyed summers at a cottage, dubbed Green Gables, at Gimli on Lake Winnipeg. Betty became a superb athlete, especially in swimming and tennis. She played tennis until she was 87 and always let her racquet do the talking. Betty won a scholarship to the University of Manitoba and graduated with a mathematics degree (1947), while minoring in varsity basketball and dancing.
Betty had remarkable chapters of her life in Winnipeg, Toronto and Halifax. She maintained a network of family and friends across Canada, the USA and Ireland, her father's birthplace. Betty was a dedicated volunteer, including with North York General Hospital, Victorian Order of Nurses and David's Place at the Presbyterian Church of St. David in Halifax. She often said that volunteering at David's Place, where she served lunch to people in need, were among the happiest times of her later life. Her gift of friendship became a type of ministry of friendship to many people who appreciated her kindness. Betty tried to help others, even by the smallest of gestures like sharing a smile, saying hello, or giving a couple of loonies. She treated people with respect and kindness, especially the less fortunate. "She had this knack of making people feel so important, which is such a special gift to the recipient," said her niece, Mary Collier of Enfield, NS.
Betty was guided by her Christian faith, which comforted and strengthened her. Betty often said she looked forward reuniting with her parents, husband, and other deceased relatives. That reunion is underway, and they're having a grand time (even without a pot of tea!).
"The summer's gone, and all the roses falling,
It's you, it's you must go, and I must bide."
A private family service will be held in Toronto. Interment of ashes will take place in St. Michael's Roman Catholic Church Cemetery, Corran Ban, PEI, beside her husband. Memorial donations are welcome to the St. Vincent de Paul Society or The Salvation Army Canada. The MacDonald family extends its thanks and gratitude to the wonderful staff, medical personnel and Personal Support Workers at the Chartwell Grenadier Retirement Residence for their compassionate care and dedicated support for Betty.