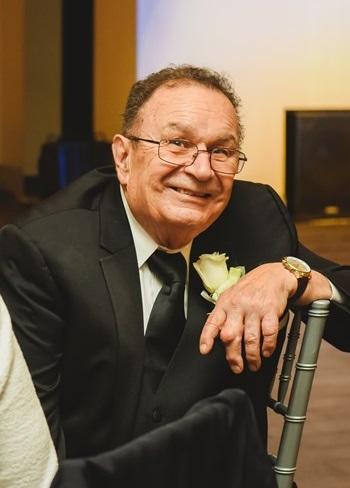 In loving memory of Edmund Bielawski, 82, who peacefully passed away on August 25th, 2021 in Mississauga, Ontario.

He is survived by his wife Sophie, his son Greg, daughter-in-law Agnes and his brother Raymond.

Ed will be remembered fondly by many family and friends.

In lieu of flowers, donations can be made to Princess Margaret Hospital.

First and foremost, Ed was a kind, loving family man. He was devoted to his wife, Sophie, his son Greg, and Greg’s wife, Agnes. Invariably he would give credit to Sophie for loving him and always being there for him. He spent many hours with his extended family and friends and came to enjoy and cherish the family pets.

Ed was a proud Parkdalian who devoted many hours playing for and volunteering at Parkdale Collegiate. He played football for the junior and senior teams, was part of the gymnastics club, and was the Eaton’s student representative. In his later years, Ed was an active member of the Alumni Association and raised money for scholarships for less fortunate students. He was given the honour of being the guest speaker at PCI’s commencement. He never forgot his roots.

Ed chose a career in Pharmacy. He practised for almost 50 years, both in the storefront and also as a specialist in Veterinary Pharmacy. He mentored students in the University of Toronto Pharmacy programme, wrote examination questions, and monitored exams. Upon retirement he was honoured by the College of Pharmacy with the title of “Pharmacist Emeritus”.

Ed was an excellent athlete. In his younger years, he was considered to be an Olympic calibre swimmer. One of his goals later in life was to complete a marathon, 26.2 miles, which he did in 2010 at the Toronto Marathon. Perhaps the highlight of his athletic career came in 2011 when he completed the Blue Mountain Half Marathon in Collingwood with me on his 73rd Birthday. As we approached the finish line, I asked the race organizer to announce Ed’s birthday and he got the crowd of about 300 to sing “Happy Birthday”. As he told the story the numbers jumped to 500, to 1000, and eventually included a full symphony orchestra. I remember the expression of joy on his face.

Ed and I spent many springs and summers attending baseball games around North America. We went to Major League and Minor League Parks. It was always a pleasure discussing baseball strategy from the stands. Our last trip to Florida and Atlanta was cancelled because of Covid and we talked about doing the West Coast in the future.

Ed loved the theatre. He regularly volunteered at the Village Playhouse in the Bloor West Village doing sound and lighting and any other job that was required.

Ed was also an active member in Alcoholics Anonymous for over 20 years. He regularly spoke at meetings around Ontario and sponsored and mentored many, many individuals. Of all the things Ed did in his life, this was the most extraordinary.

In conclusion, Ed Bielawski was someone who found more happiness in giving rather than receiving. By giving selflessly, he received many profound gifts. He was loved by all and will be missed by all. He leaves the world in a better place.