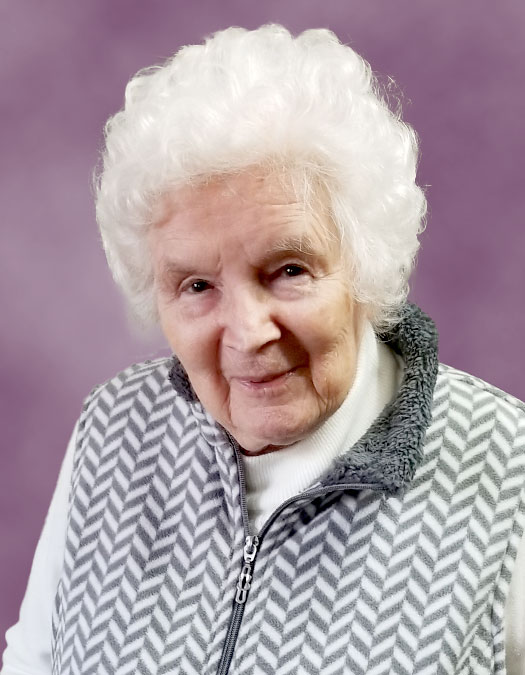 Dorothy passed away peacefully at St. Michael’s Hospital on Wednesday, September 22nd, 2021, just shy of her 95th birthday. Predeceased by her beloved husband Harold (2006). Loving mother of Ruth (Jonathan), Kathryn, and Margaret (Brian). Much loved grandmother of Judith, Summer (Rick), Matthew (Raminder), Nathaniel, Timothy (Alex), Caroline and Jackson. Proud great-grandmother of Lincoln and Maya. Cremation has taken place. A private memorial service will be held at Erindale United Church. Heartfelt thanks to the dedicated, caring staff at Christie Gardens and Bridgepoint Healthcare. In lieu of flowers, donations may be made to the United Church Mission and Service Fund (united-church.ca/donate) or The Canadian Centre for Policy Alternatives (policyalternatives.ca). Please visit the photo link above to see a gallery of pictures. Condolences can be made through the guestbook link below.

A devoted wife and mother, a champion grandmother, a life long learner and a dedicated woman of faith.

Dorothy’s Life:
Dorothy was born in Winnipeg Manitoba on October 4th, 1926, to Olive and Bertram Beales. She is predeceased by her loving sisters Ethna and Shirley, and her loving brother Leonard.Her “stage debut” was as a fairy in the school operetta in the late 1930s, along with her life long friend Lois Wilson. We would have loved to be flies on the walls of that school gym!! They went on to enjoy many canoe trips together on beautiful Lake of the Woods.

Dorothy graduated from Kelvin High School in 1943 and obtained a B.A. from the University of Winnipeg (United College) in 1947. She then travelled by ocean liner to represent the Canadian Student Christian Movement at the first post-war meeting of the Student Christian Movement’s worldwide body in Europe. She completed one year of graduate studies in Theology in 1949 at U. of Winnipeg (where she headed the class of fourteen males). Go Dorothy!! She attended Union Theological Seminary in New York between 1949 and 1950.

Dorothy married Harold, a United Church minister, in 1950. They had three daughters, seven grandchildren and two great grandchildren. Harold and Dorothy were together until his passing in 2006. They lived in Flin Flon Manitoba, Winnipeg, St. Catharines, and Mississauga. Dorothy was actively involved with the United Church in all these communities.

Dorothy was an original 1960s/1970s career woman role model “extraordinare!” In the mid 1960s she worked with a professor at Brock University marking history papers, and counselled at an adult education centre. After she moved to Mississauga in 1967, Dorothy upgraded her qualifications at O.I.S.E., University of Toronto, and worked as a school psychologist for the Peel District School Board until her retirement.

Mom read widely and loved listening to history lectures, TVO’s “Agenda,” CBC’s “Ideas,” and anything connected to social justice issues. She enjoyed travel, live theatre and cottage life. She delighted in the company of any or all of her grandchildren who she adored beyond measure. Mom had a keen sense of humour, the ability to notice the little absurdities of life, and that rare attribute of being able to burst into laughter at her own expense. In a “final wishes” letter she wrote, “I treasure the intellectual activities that I pursue daily. I love to read, think, and discuss with others politics, religion and education. I treasure friends and family.”
We love her. We miss her.

I have fought the good fight, I have finished the race, I have kept the faith.
2 Timothy 4:7