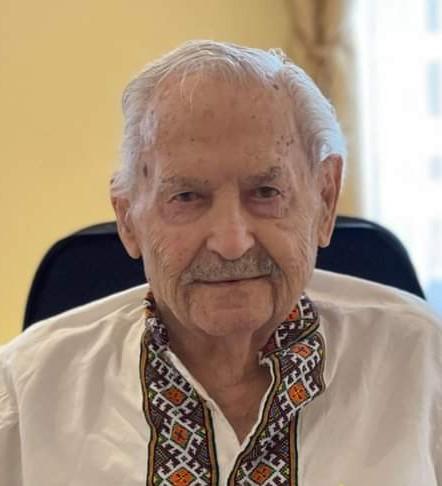 In the presence of loving family in the final hours of his life, he passed away peacefully in the evening of May 31. Survived by his loving wife of 75 years, Raisa, their sons (and their wives), Michael (Sandie), Stefan (Mirka), and Jimmy (Diana), he left this world with the assurance from his family that he had done many good things and made the world a better place. Born in Hermakivka, Ukraine in 1925 to modest beginnings, his world was disrupted by the war, following which he found himself in a displaced persons camp in Germany where he met the love of his life, Raisa. They moved to England and finally Canada where they raised their family. He operated his business, Skyway Electric, in Hamilton until age 90 and was active in various charitable causes and Ukrainian organizations including The Ukrainian National Federation. A Ukrainian patriot, he bore no ill will to any man or nation, and remained grateful to his adopted country Canada which allowed him, through hard work and diligence to achieve his dreams. He will be dearly missed by his grandchildren Jason (Stephanie), Nikki (Shawn), Lydia, Christina, Joseph and Adryan and great grandchildren Jaxon, Justus, and Roman whom he adored and who were enamoured by their loving, wise and fun-loving grandfather, and by all who knew him. The family extends special thanks to the compassionate staff of Ivan Franko LTC facility who cared for him in his final months, and to Dr. George Rewa who, on more than one occasion, saved and enhanced his life.
Panachyda prayers at the Turner & Porter Yorke Chapel on Tuesday, June 7, 2022 at 7:30 pm.