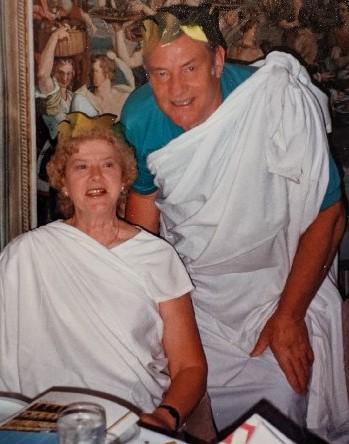 It is with heavy hearts we announce the passing of Dan and Teresa Coppinger.

Dan was born in Lackagh, Co Galway Ireland. He was one of six boys. He left at 13 to live in Kildysart, Co Clare. There he worked with an uncle managing a farm. Dan left for England to join the RAF at age 17. He spent 5 years with them.

Teresa was born in Cork City, Cork, Ireland. She was one of eight. At age 16, Teresa left to train in nursing at the Hackney hospital.

One afternoon a tea dance was held where Teresa was training. It was there Dan and Teresa first met. On September 6, 1955 they were married at St Mary's Church Waterloo, Blarney, Ireland. After their honeymoon they settled back in London. Realizing they wanted to move on, Australia was their first choice. However, one of Dan's brothers convinced him to immigrate to Canada. So in 1956 Dan went first and Teresa arrived six months later. Dan got a job with TTC, Teresa with Toronto Western hospital. Daughter Patricia joined the family.

Dan and Teresa loved to throw parties. It was dancing and sandwiches. The expats would come along with their landlords.

By the beginning of the 60's, Dan and Teresa bought their first house. They continued to have parties with neighbours joining in as well. At this time Teresa switched hospitals to Northwestern Hospital. Teresa remained employed there until she retired.

By the mid 60's Dan and Teresa were on the move again. They sold all their belongings and immigrated to Australia. Unfortunately, they realized it wasn't the place for them and came back to Canada. Dan got a job with the Valhalla Inn and Executive Centre. He remained there until he retired. By this time son Daniel joined the family. At this point Dan and Teresa started their passion for travelling. Ireland, Australia, USA, cruises. Every year was a new trip.

Once retirement rolled around Teresa took up golf and bridge. When she could no longer golf, bridge became her passion. The condo they eventually moved to had a wonderful bridge group that Teresa loved. Dan took up volunteering at William Osler Hospital, Etobicoke site. Dan loved meeting and helping new people. Summers for the couple were spent at their cottage. Spending time with their grandchildren was top of their list. They continued to travel well into their 80's.

Unfortunately, like all good things, the party must end. Dan and Teresa died 2 days apart.

In lieu of flowers Dan and Teresa requested donations to Dorothy Ley Hospice.

Funeral Mass will take place for both Dan and Teresa on Thursday April 15, 11 am at Holy Angels Catholic Church. Burial afterwards at Queen of Heaven. Due to Covid restrictions attendance is by invitation only. The Mass will be livestreamed and a link will be available through the Holy Angels website.
Order Flowers
Make a Donation
Help Extend the Memorial
Order a Keepsake Book