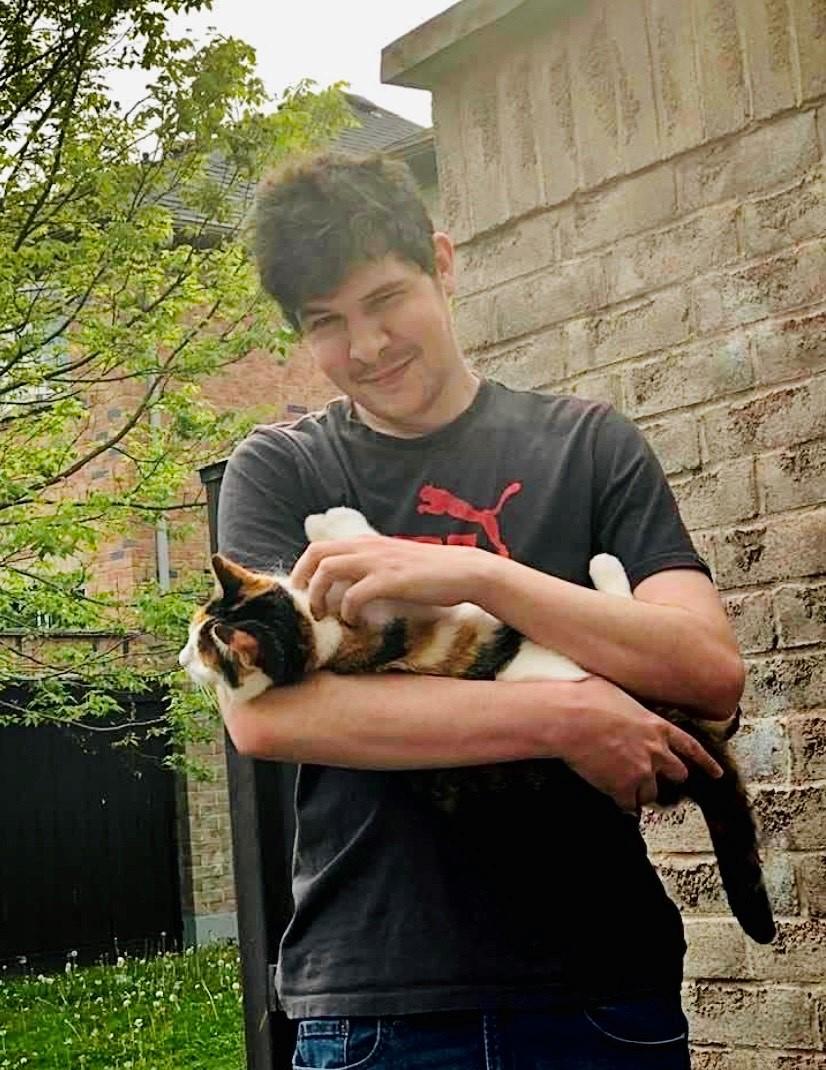 Corey Bezanson born May 19, 1995 in Toronto, Ontario to his proud mother Melanie. He had only 26 years in this life and died on July 14th, 2021 in Mississauga, Ontario.

He will be so greatly missed by his mother Melanie & his stepdad Devon, younger sister Ashton & her partner Tristan, younger brothers Logan and Jaiden, his Aunty Megan & her partner Tony. He will also be missed by his cherished friend Peter as well as many other dear friends and family. His beloved friend and cat Lola sends purrs out to the one who loved her so.

Corey was sometimes shy and had a sweet gentleness about him. When most comfortable he could be boisterous and didn’t mind being a clown and jokester to make others laugh. He had raw honesty and a big heart. His generosity meant always giving from what he had, even when he had little.

He was a naturally gifted artist from a young age and loved the Captain Underpants books, Pokémon, Beyblades and Harry Potter in his earlier years. He was sometimes mischevious and was often the class clown growing up.

As a young adult he enjoyed working with and was kind to children. He loved coffee and Smarties and enjoyed playing video games, especially RuneScape. He liked watching YouTube and movies such as Requiem for a Dream and a recent favourite film of his was Nightcrawler. He also loved the shows Breaking Bad, The Office and The Simpsons. His great sense of humour was often tinged with sarcasm. He had a strong connection with animals and was always kind to them. He appreciated nature and enjoyed hiking, canoeing, camping and bonfires. Corey was usually in a hoodie pullover or t-shirt, he especialy loved Nike and was known for so frequently wearing his signature bright blue coat.

Considerate and kind, intelligent, nostalgic and sentimental, he was a sensitive soul. Corey’s eclectic taste in music spanned many genres from rock oldies, 90’s grunge, hip hop, rap, electronic music, retro 80’s and more. Corey enjoyed cleaning and keeping things tidy, working with his hands and doing physical labour. He also had an entrepreneur's mind and had made several ventures in business over the years, known to many of his friends as “The Business Man”. He spoke about possibly going back to school to learn business and marketing and also had interests to work in skilled trades and agriculture.

He took pleasure in helping others and made efforts to encourage those that were down even when he lacked the encouragement for himself. He was accepting of people for who they were and where they were at in their life journey. He apologized easily for any missteps and had a grateful heart. Loved and appreciated by so many, he often failed to believe in the love for himself.

Mental health and addiction can be hard things to talk about in our society. Corey’s mother Melanie wishes that more people would be able to talk openly about these challenges and not feel ashamed or judged in doing so. She notes that one of the biggest challenges Corey faced in life was a lack of supports in our broken mental health care system.

Corey fought hard, courageously and continuously, to overcome persistent addiction and mental health challenges. They often got the best of him in recent years, but no matter how many times he fell or how deeply he struggled with his pain...he always got back up and tried again. Very much wanting to heal himself and his relationships, he continually sought supports to do so.

The last few months of his life , Corey was in a healthier place than he had been in for quite some time. He made huge strides in his journey in recovery from his addictions by digging deep with himself and with the support and love of his family.

Though he had been succeeding in overcoming addiction for several months he did feel himself struggling to maintain due to his challenges with mental health. He was reaching out for more support within the healthcare system to maintain and build on the progress he was making and was asking for help with the challenges he was still facing. It wasn’t enough.

He was on a positive path to recovery when he died. It is truly heartbreaking that Corey did not receive the support and connections he was reaching for in the time and ways that he so desperately needed.

Many of the people who were connected to and loved Corey throughout his life attended a visitation held at Turner & Porter Funeral Home in Mississauga on Thursday July 22nd, 2021. They gathered around him while listening to some of his favourite songs. Sharing Smarties & memories of Corey in laughter and in tears; they honoured the very special place he held and will always hold in their hearts.

Corey, you are deeply loved and will be so greatly missed, may you finally find some rest and peace.

God looked around his garden
And found an empty place.
He then looked down upon the earth,
And saw your tired face.

He put His arms around you
And lifted you to rest.
God’s garden must be beautiful,
He always takes the best.

He saw the road was getting rough
And the hills were hard to climb.
So He closed your weary eyelids
And whispered “Peace be thine.”

It broke our hearts to lose you
But you did not go alone…
For part of us went with you
The day God called you home.