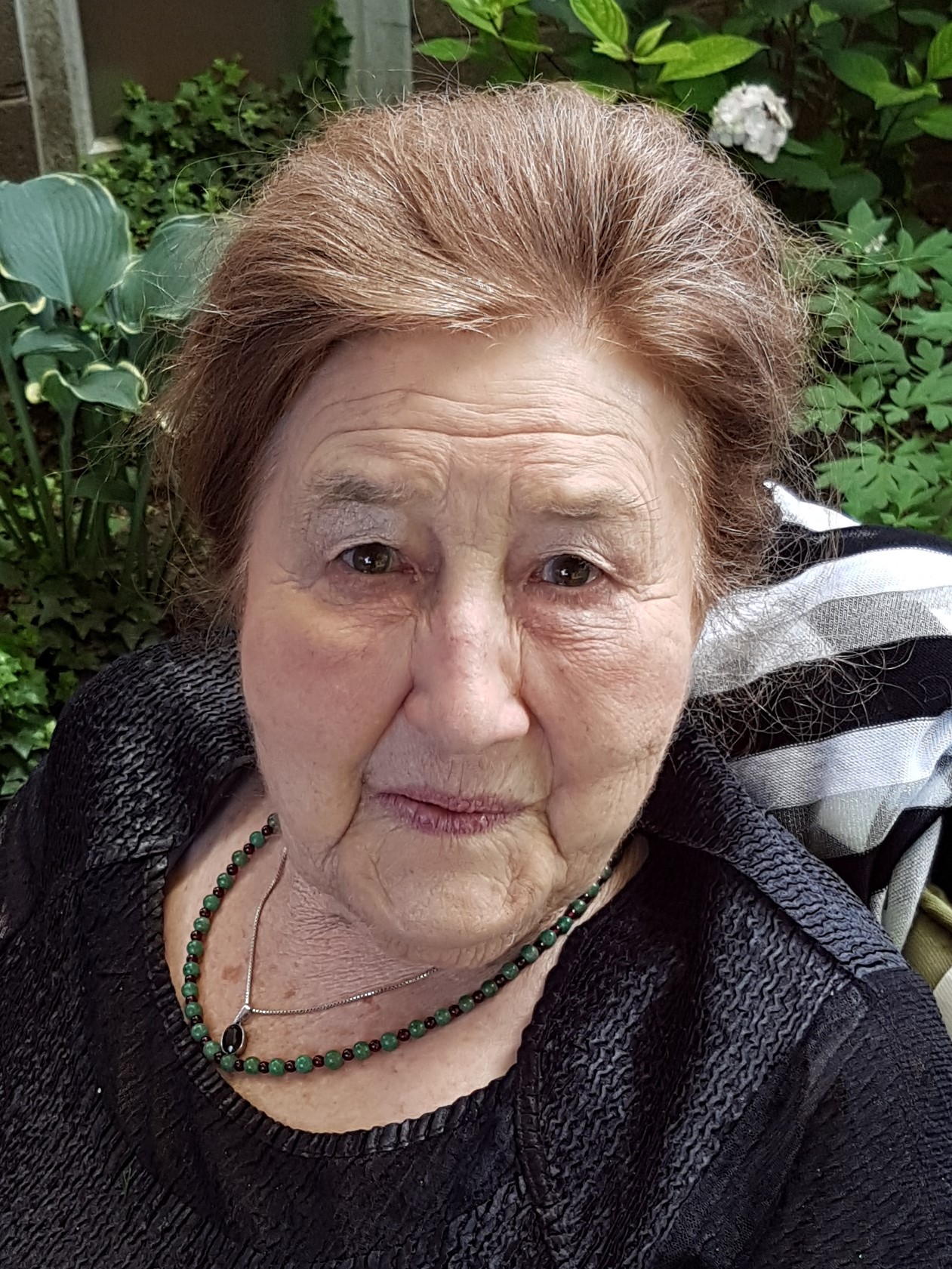 On March 8, 2021, Catherine Elizabeth Norris (nee Wambold) passed away suddenly in her Etobicoke home. The eldest of three girls, Catherine was born to Henrietta and Leslie Wambold in Markham on July 5, 1937.

Catherine taught in Scarborough, Ontario and then Yorkshire, England. She continued to travel internationally with husband Thomas, living in Singapore and Prague and visiting friends and family around the world.

At home, she supported the Canadian Exchange Teachers (CLEE) as Past President, and was active in the UCW at Royal York Road United Church. Cathy always put her kindness and problem-solving skills to work with community and school projects.

Her generosity was renowned in her home and at her table where friends and strangers (who became friends) would be served gourmet meals with magically beautiful presentation. She was an avid flower photographer and wore black with style.

Cremation has occurred with celebration of life delayed by Covid-19. In lieu of flowers, memorial donations may be made to Aphasia Institute, Heart and Stroke Foundation or Royal York Road United Church. Please see the "Donations" page for links to these worthy causes.

The above obituary was posted in the Toronto Star on Saturday, March 13th, 2021. However, the family feels that there is so much more to say about Catherine. You can read a few additional thoughts below. We also encourage you to post your personal stories on the "My Story" page.

So many people have shared so many words to describe Catherine. Topping them are loving, kind, good and generous. Her inner compass created some simple rules that aligned to the time she spent with her loved ones, and her stewardship to others. You can see her authentic inner character in the stories of her life.
Her intelligence was matched with an intense curiosity of the world and of others. She was grounding, even as she supported high-flying thoughts and experiments. Others could see higher as she supported them on her strong shoulders.

While she often pretended to be the “straight woman”, Catherine had an incredible sense of humour. It sometimes snuck up on you, like an unexpected tickle. Her patience was extensive, especially with putting up with the antics or “humour” of her family. And to hear her laugh was a precious experience.

Her resourcefulness, determination and ability to get “stuff” done, and done well, was an inspiration to many (including a lot of girls, hers and others). She would work out a problem in ingenious ways. She is a role model and guide to many.

Catherine created a beautiful and comfortable home. She filled it with interesting and meaningful items. Sometimes visitors coming into Catherine and Thomas’ home thought they had accidentally stepped into a private museum. She lavishly yet tastefully decorated for Christmas, Chinese New Year, Easter and more. She created a place that was an eddy of calm in which a flurry of activity occurred safely within its walls. Even when her residence moved around the world, she created a space that felt like a secure home should feel. Her home, like Catherine, created a sanctuary which allowed her family to face the world from a position of strength.

Catherine loved her family so very, very much. She would do anything for them. As they moved closer to her, the Wambold sisters were a family with great love and steady interaction. She would create a Christmas dinner that would be delicious, bountiful and comforting. Only when the younger generation started cooking holiday meals on their own did they know how much care and work went into it – all without a word of complaint. She was so proud of the accomplishments of each member of the family. She was a loving mother who taught her girls not only the skills they needed to survive in the world but also patterned an inner set of characteristics and strengths they could model in the future. She loved her husband dearly and their connection as a team was indomitable.

Catherine had an elegance and grace she brought with her in her bearing and her clothes. From her hats to an extensive scarf collection, her avantgarde jewelry, and a flair for the dramatic, her grandiose style belied her 5-foot frame. Even as she moved closer to a streamlined black wardrobe, she did it in panache.


Catherine was more of the doer of the family rather than the talker. Yet she wasn’t afraid to speak her mind and defend those she loved.

After her stroke, aphasia made Catherine’s communication style much more colourful. Deciphering some of her requests took some time but were generally creative and funny. Sometimes it would take 50 words to get to the one specific one needed. At other times, calling someone by another name would end in her saying “you know who you are”. While she might jokingly hear “Mom, I need a verb or a noun”, she persevered to have herself heard and, in spite of the impediment, conversed well, and loved to talk to friends.

Before or after the stroke, her greatest strength was her ability to listen. You could tell her anything and she’d hold judgement, offer suggestions, and remember EVERYTHING!

She was a fervently loyal friend. If Cathy was your friend, she had your back. While she wasn’t the loudest voice in the room, she was heard mainly because what she said was something worth listening to. Catherine was so thoughtful, remembering birthdays and milestones, marking them with her own homemade photo cards. She spent time to talk with and listen to those she was close to. People gravitated to wherever she was. She loved her friends deeply and cares for their happiness and wellbeing.

Catherine was a wonderful and adventurous cook. There wasn’t a recipe she wouldn’t try and there wasn’t a recipe she wouldn’t change (if the feeling moved her or there was something different in the fridge). From her catering enterprise to her “unmatched maker of bagged lunches”, she fueled the body and the soul. She taught her love of food to her children and guided her grandchildren in learning kitchen skills at the cottage during the summers. Thomas became a jam-maker extraordinaire under her tutelage, and the family learned heritage skills that were well used by her children before they became trendy now.

Catherine was a whiz at the ‘home arts’, making her children’s clothes and toys, crafting amazing play and Halloween costumes, and creating presents for others. She could upholster or cane a chair, sew cushions, curtains, sleeping bags. Once when she was driving to Quebec, she made a hat. Even her wrapping was creative – making gift bags out of old calendars.

Within the house, she had a knack with spaces and designed many rooms in the house to be efficient and space-saving. Her ‘bijoux’ kitchen boggled the mind that so much could be produced within its four small walls. She not only made things nice, she made them better.


Catherine would open her home and table to many, wherever she called home. Whether it was a place to “crash” while visiting Toronto, South River, Singapore or Prague, or a fancy and remarkable party, she was welcoming and caring. Strangers became friends, and many generations knew that when they went to the Norris’ there would always be something good waiting.

When you had an event with her, you were experiencing ‘magic’; the alchemy of great food, deeply considered settings and incredible love. There are many who can recall an evening or time that sticks in their memories over the years.

Catherine supported her community. Often time it was behind the scenes for Thomas’s work and many charitable groups – feeding, driving, opening her home for parties and meetings. For her daughters’ schools she was always getting things done – supporting in fundraising, creating costumes, facilitating and keeping on track. There were signs of her presence on most successful accomplishments.

Cathy was an active member of the Unit 10 United Church Women’s (UCW) group, suggesting outings and introducing international tastes to the group. With her close friends, they made the jewelry table at the Royal Fair look like a display at Saks which benefited the church in many ways.

Catherine loved to travel. Early in her career she moved to England, making lasting friendships. She travelled with Thomas in their moves to Singapore and Prague. With only English and the Rosetta Stone of hand and facial gestures, she became a local and regional tour guide, discovering and sharing gems of cities and countries that local resident may not have found. She was game for any trip, and dug into the culture and local food with gusto.

When in Canada, the cottage became a special place for Catherine. She’d sit by the fire looking out at the lake; arrange the wildflowers that Thomas would cut for her on his walks; and make fresh-baked muffins from the raspberries gathered by grandchildren from the ditches by the road. Catherine would lead photo excursions to the dump to snap a picture of bears or travel to nearby towns to ride the carousel, visit shops and museums, or appreciate natural wonders of the Near North. The afternoon would often find her at the end of the dock for ‘cocktail hour’ with a glass raised and some lovely snacks nearby.

Catherine noticed, curated and celebrated beauty. Her connection with nature was strongly drawn to flowers. Her gardens created peaceful sanctuaries. Her flower arrangements not only beautified her home but the church’s exterior and interior as well. Honing a skill in photography, she focused on flowers and visited garden show in Chelsea and Holland to capture images that adorned birthday cards sent around the world.

Catherine was a patron of the arts – she shared her love of it with everyone. She would take her children and their friends to the ROM to discover the wonders of history and the world. Her annual Nutcracker Ballet excursion was a highlight for her Toronto grandchildren. She enjoyed choral concerts (and could sing along too), and widely appreciated the many theatrical and musical offerings of their regular subscription outings. Her wise words at the AGO to her daughter as they looked at a painting “you don’t have to like it; you just have to look at /think about it” could be adapted and extended to so many other times as well.
We think about you affectionately, Catherine. We love you and miss you.