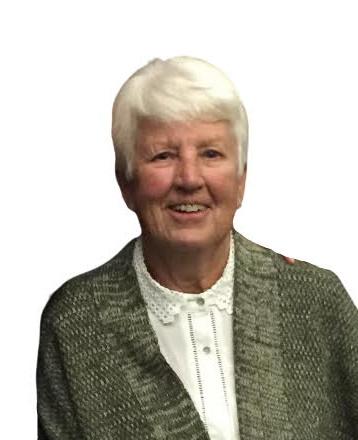 Passed away peacefully on September 10, 2022 at Trillium Health Partners - Mississauga Hospital. She was surrounded by her family who will sadly miss her guiding spirit.

Beth was raised on a dairy farm which gave her the lifelong conviction that hard work and focus were essential criteria for success. She was trained and graduated as an English teacher from Victoria College, U of T, in 1957 and began teaching in Aurora, Ontario. Two years later she applied to the Department of National Defence and was accepted as a Highschool teacher for RCAF personnel’s children at 3 (F) Wing in Zweibrücken, Germany. There, she met her husband, Wayne, and for the next 62 years they “Were joined at the hip”. They were married in the Chapel at 3 Wing and very soon after returned to Canada. In 1964, they decamped again and moved to Sydney, Australia where Wayne had a position with QANTAS, the Australian airline. They returned to Canada in 1966 with Wayne joining Air Canada Flight Operations. Beth, not to be outdone, decided to rejoin the workforce and once a suitable caregiver was found for their three children she returned to teaching. For the next twenty five years, she continued to teach but moved from the classroom into related educational fields. She especially enjoyed her time as Manager, Special Education in the Wellington County School District. During her teaching career, she returned to the University of Toronto and earned her Master of Education (MEd). She also completed her Master of Social Work (MSW) after retiring and briefly returned to the work force in a social work role.

After retiring for the second time, she developed a passion for NFL football and was able to converse and trade stats with her sons and grandsons. She was also the master scribe in the family and many essays and papers were surveyed and corrected, with briefings, by her to everyone’s satisfaction including many Professors. She enjoyed travel and it was a joke in the family that she always had a bag packed waiting by the door.

Beth was an independent woman with an immense love and justified pride in her family of which she was the acknowledged leader.

A sincere thank you to sister Janice Auld for her assistance in caring for Beth. A special thank you to Dr. Filewood and Dr. Zhang, nurses Jodi and Kyle in the ICU at Trillium and Dr. Yussaf and nurses Carlo, Amy and Josh in the Medical ward for their care, compassion and expert medical help.

The family and close friends will hold a memorial at a later date. No flowers please but donations may be made to the Trillium Health Partners - Mississauga Hospital in Beth’s name.